One killed, 9 hurt by grenade in Burundi capital 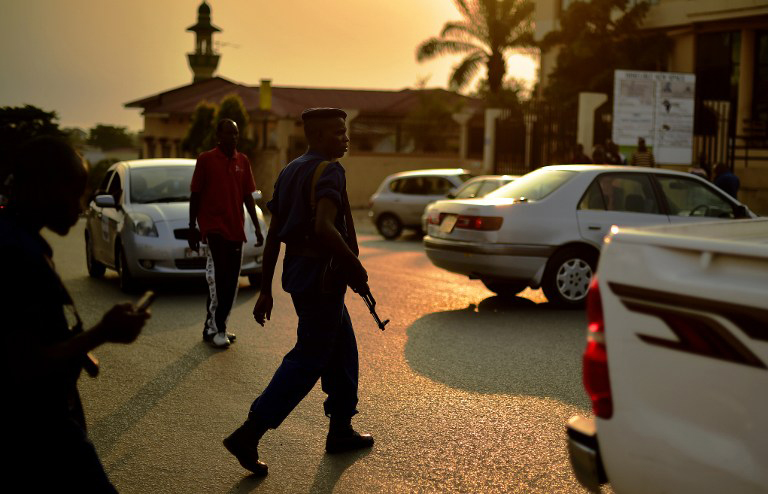 A Burundian policeman walks at the scene of a grenade attack in Bujumbura on July 20, 2015. Presidential elections are due to be held in the country on July 21, 2015.

NAIROBI - One person was killed and nine others wounded when a grenade exploded in Bujumbura, in a neighbourhood of the capital known as an opposition bastion, the city's mayor said Thursday.

"A grenade was thrown and exploded among a group of people who were having a beer near the bus station in Musaga," Freddy Mbonimpa told AFP of the incident which occurred on Wednesday evening.

Witnesses said many police officers went to the scene with some seen firing their weapons.

"Those were warning shots fired into the air," the mayor said, adding police had opened an investigation "to find the criminals behind this attack".

Musaga, in the south of the city, is a bastion of opposition where protests erupted two years ago over President Pierre Nkurunziza's bid for a disputed third term in office, which he went on to win.

The demonstrations swelled into a major crisis which even saw a failed coup attempt. Since then, Musaga has seen regular anti-government protests.

The unrest has claimed between 500 and 2,000 lives and more than 400,000 Burundians have been forced into exile, rights groups and the UN say, while there have been reports of hundreds of cases of torture and forced disappearances.

Last month, three members of the youth league of Burundi's ruling party -- considered a militia by the UN -- were killed in a grenade attack in the same neighbourhood.

The "Imbonerakure", whose name means "The Watchmen", has long been accused of using barbaric methods to achieve political ends on behalf of Nkurunziza and his ruling CNDD-FDD party.

Four days later eight people were hurt in a grenade explosion in a northern Bujumbura neighbourhood considered a CNDD-FDD stronghold -- the scene of a string of similar attacks that have left two people dead and around 20 injured in less than a month.