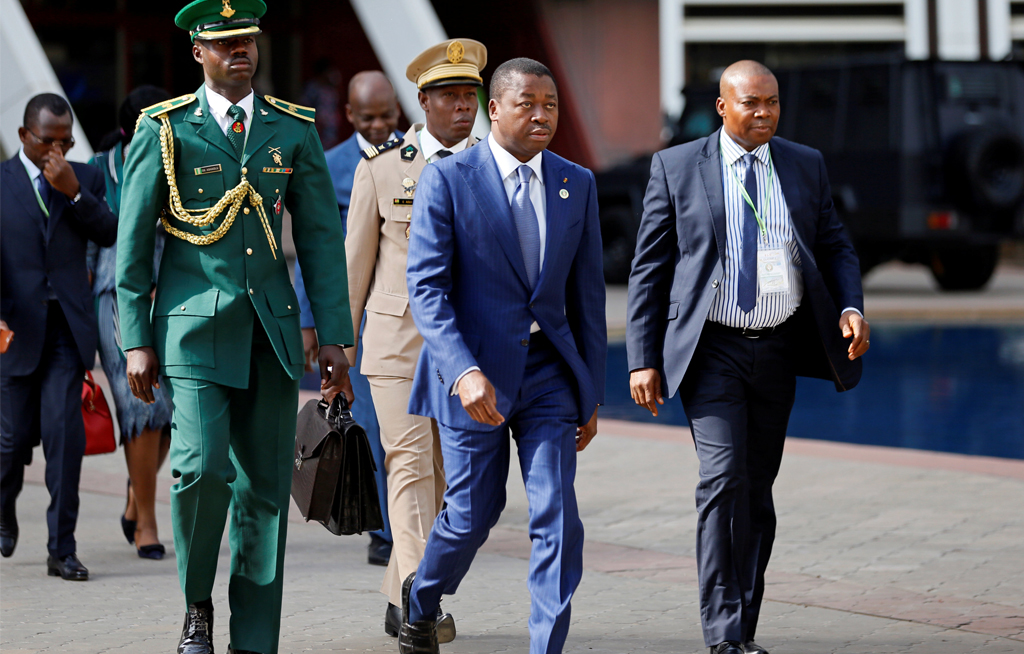 Togolese President Faure Gnassingbe is seen on arrival for the 52nd Ordinary Session of the ECOWAS Authority of Heads of State and Government meeting in Abuja, Nigeria December 16, 2017.

LOME, Togo - Thousands of people took to the streets in Togo on Saturday in the first anti-government protests of the year, as supporters of President Faure Gnassingbe staged counter-demonstrations.

A coalition of 14 political parties has staged almost weekly demonstrations since August last year, calling for Gnassingbe to step down and the introduction of a two-term limit for presidents.

Gnassingbe has been in power since 2005 when he took over from his father, General Gnassingbe Eyadema, who himself ruled Togo for 38 years.

There was a strong police presence in Lome on Saturday, according to an AFP reporter at the scene.

But unlike previous demonstrations, where opposition supporters clashed with the security services, it passed off without incident.

The veteran opposition leader Jean-Pierre Fabre said the date was chosen because Saturday was the 55th anniversary of the assassination of Togo&39;s first post-colonial president, Sylvanus Olympio.

Fabre described it as a "fateful date" of broken dreams when "violence and deception entered the country&39;s political history".

Similar protests were held elsewhere in the former French colony, as well as in Berlin and Washington by the country&39;s diaspora.

Supporters of Gnassingbe&39;s ruling Union for the Republic (UNIR) party took to the streets in seven cities outside Lome.

UNIR executive secretary Aklesso Atchole called the mobilisation "marches for peace". "These marches also aim to support the actions of the head of state," he said.

The opposition has organised a women-only march in Lome next Saturday.

Several West African countries have called on Gnassingbe and the opposition to meet for talks under the supervision of Ghana&39;s President Nana Akufo-Addo and Guinea&39;s Alpha Conde.

Talks were announced in early November but appear to have stalled, with no date fixed for the start of discussions.

The opposition first wants its supporters who were arrested at previous demonstrations to be freed from custody.

It also wants security forces to withdraw from the north of the country, where the Panafrican National Party (PNP) has support.

Fabre said a coalition delegation would be in Accra and Conakry on Monday and Tuesday on the invitation of Akufo-Addo and Conde.