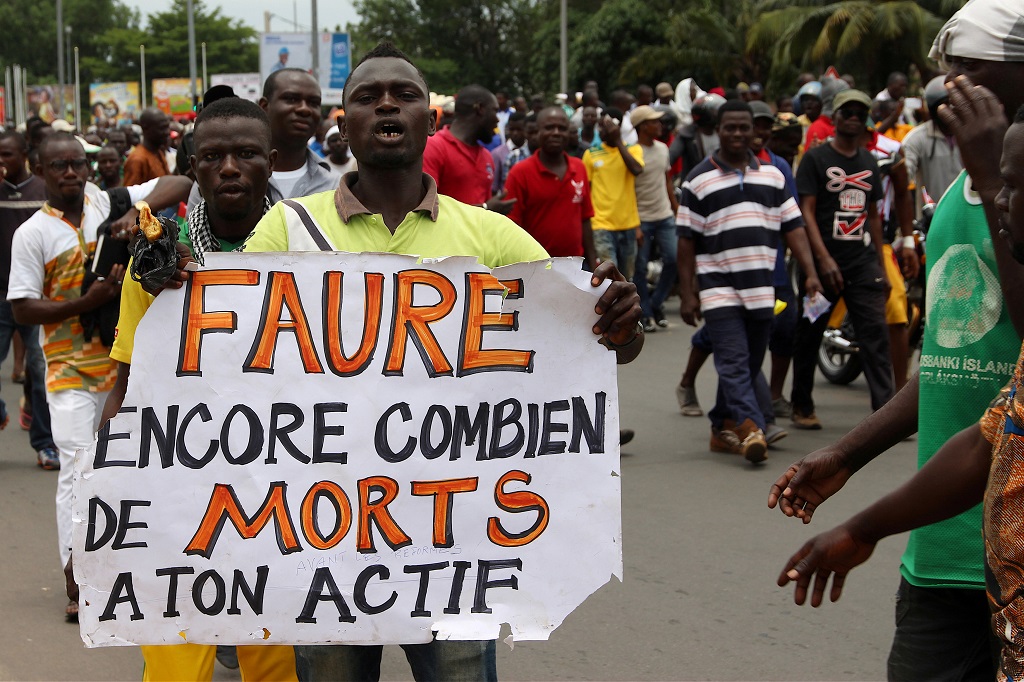 A man holds up a sign, which reads: "Faure still how many death by you", during an opposition protest calling for the immediate resignation of President Faure Gnassingbe in Lome, Togo, 6 September 2017.

LOME, Togo - Thousands of people took to the streets in Togo&39;s capital, Lome, on Tuesday, in the latest protest calling for the long-standing President Faure Gnassingbe to step down.

The demonstration is the first of three planned marches this week and comes after more than two months of nearly weekly opposition action against half a century of rule by the Gnassingbe family.

"Fifty years of bloody dictatorship must end," read one banner on the streets of the capital, Lome. Another called for the "international plot against Togo" to end.

A retired teacher, who his name as Follivi, told AFP: "Why give up after three months? You&39;re never tired when you&39;ve started a fight. I&39;ll see the battle through."

On Monday evening, the government indicated it was "taking the necessary measures for the opening of a dialogue" with its political detractors.

Veteran opposition leader Jean-Pierre Fabre said they, too, were in favour of dialogue "but to discuss the conditions for Faure Gnassingbe&39;s departure".

A source close to Togo&39;s presidency said Ghana&39;s President Nana Akufo-Addo, made a brief visit to Lome on Sunday to talk with Gnassingbe about the protests.

Last month, some 500 Togolese nationals fled across the western border into Ghana to escape what they said were human rights abuses by the police and military.

The government had imposed a ban on weekday marches that opposition supporters ignored, leading to violent clashes. The restriction has since been lifted.

At least 16 people have been killed and more than 200 injured since the first demonstration, according to an AFP toll.

Gnassingbe has met other regional heads of state in recent weeks, including Benin&39;s Patrice Talon and Alpha Conde of Guinea.

They have offered their services as mediators while Ivory Coast&39;s President Alassane Ouattara has urged his Togolese counterpart to open talks to resolve the crisis.

"The army has been in the area since last night (Monday) and has been chasing young activists to their homes," said Ouro Akpo Tchagnaou, from Fabre&39;s National Alliance for Change (ANC).

"They are breaking up any gathering on the streets and are using sticks and chains to beat people."

Togo&39;s opposition wants a two-term limit on the presidential mandate and the introduction of two-round voting.

Gnassingbe has been in power since 2005, taking over on the death of his father General Gnassingbe Eyadema, who ruled the former French colony for 38 years.

A referendum is expected to take place in the coming months on the issue, with the opposition calling for the two-term limit to be retroactive, to prevent the president from standing again in 2020 and 2025.