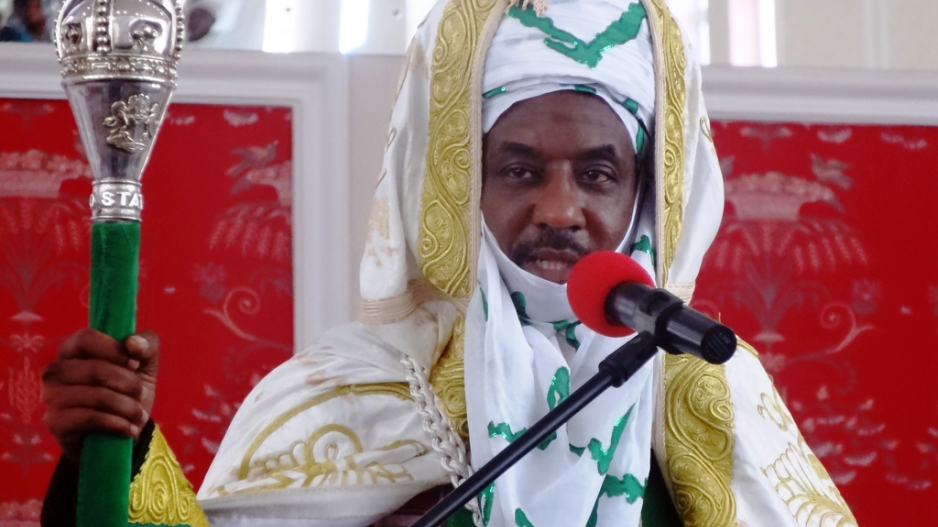 File: The emir of Kano Muhammadu Sanusi II speaks shortly after receiving staff of office during his coronation as the 57th emir of the ancient Kano emirate on February 7, 2015 at the newly built Coronation Hall near the Kano state governor's office.

KANO - One of Nigeria's most prominent Muslim leaders is under investigation on suspicion of embezzlement, fuelling rumours that some want him removed after he made a series of comments about the need for social reforms.

Anti-corruption investigators are looking into the accounts of the Emir of Kano, Muhammadu Sanusi II, following allegations of gross mismanagement of royal finances.

"We have gone far in the investigation... to safeguard the honour and prestige of the emirate council," the head of the anti-corruption unit in the northern state of Kano, Muhyi Magaji, told AFP.

The treasurer and secretary of the state-funded royal court have been summoned for questioning on Tuesday, he added.

A source familiar with the investigation said the probe centred on the use of six billion naira ($19 million, 17 million euros) of palace funds to pay for luxury cars, chartered flights, phone and internet bills as well as other personal expenses.

The council has denied the allegations.

"The emirate council has never bought a Rolls Royce for the emir," treasurer Mahe Bashir Wali told reporters last Monday. "These cars were given as gifts by his friends after he became emir."

Wali maintained that the emir always bought his airline tickets with personal money and that the state government approved all his spending.

The emir, who is revered in Nigeria's Muslim-majority north and whose guidance is sought in spirital and temporal matters, was appointed in June 2014 after the death of his predecessor, Ado Bayero.

In the last three years, the Western-educated ruler has broken with royal tradition, speaking out about the need for social reform in a fiercely conservative region.

To some extent, that is unsurprising.

In his previous job as governor of the Central Bank of Nigeria, Sanusi Lamido Sanusi, as he was then known, caused shockwaves by alleging a $20 billion fraud at the state-run oil company.

In response, the president at the time, Goodluck Jonathan, suspended the trained economist and banker in what many saw as politically motivated retribution.

As emir, Sanusi has said that men without sufficient means should not take more than one wife, prompting protests from clerics and residents in a city where polygamy is deeply entrenched.

He has also hit out at the federal government's economic policies, saying they have led to poor governance and lack of development in the north, setting him on a collision course with the authorities in both Abuja and Kano.

Recently he publicly criticised the governor of the neighbouring state of Zamfara, who blamed divine retribution and "fornication" for a mass outbreak of meningitis that has killed more than 800 people in the north.

The Kano emirate dates back more than 1,000 years, during which time it has developed norms and etiquette to which every emir is expected to adhere.

That includes maintaining a dignified silence and avoiding open confrontation with political leaders, instead cultivating them in private for the greater public good.

A Zamfara senator, Kabiru Marafa, has accused Sanusi of "derailing from the tradition laid down by the former occupants of the throne he is sitting upon now".

"He is no longer a whistleblower or a university lecturer," he was quoted as saying by The Punch newspaper in an interview.

"Telling truth to power is in his blood, it runs in his lineage and nothing can make him change," one of the emir's aides said.

"This is raw politics and nothing more," added Nura Ma'aji, an anti-corruption activist based in Kano.

"The emir has come out bluntly and told truth to power... (and) the state government is using the anti-corruption commission to disgrace him."

The appointment of traditional rulers in Nigeria is agreed by a committee of "kingmakers" and subject to the ratification of the state governor, who also reserves the right to remove them from office.

Sanusi's grandfather, Sir Muhammad Sanusi, found himself in a similar situation in 1963 after nine years as emir.

He wielded power as one of Kano's most charismatic emirs but was forced to abdicate, allegedly for embezzling tax funds and insubordination to political authority.

"The truth of the matter is that (he) was removed because of his arrogance and refusal to accord the then regional government the respect it deserved," said journalist and blogger Jaafar Jaafar.

"His indictment by a report of a commission was only used as a pretext to dethrone him. And from all indication his grandson is following in his footsteps."

The current emir has yet to make any comment on the claims.