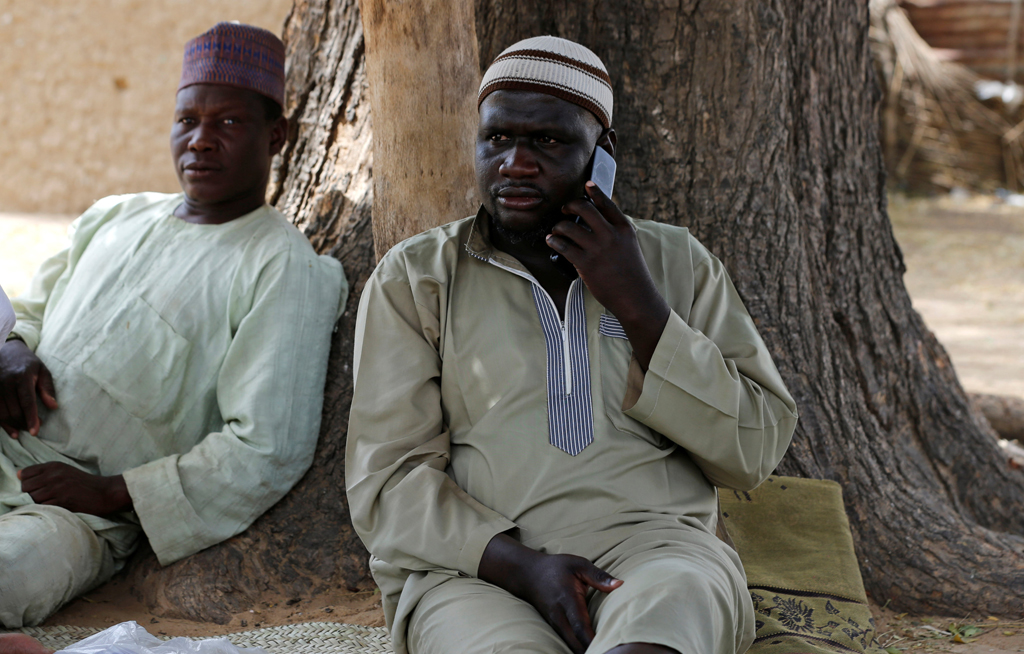 Committee chair Bashir Alhaji Manzu, whose teenage daughter Fatima Bashir is missing, speaks on the phone in Dapchi in the northeastern state of Yobe, Nigeria February 23, 2018.

DAPCHI, Nigeria  - Parents of schoolgirls newly-abducted in northeastern Nigeria plan to join the Bring Back Our Girls movement that gained global prominence in a bid to win freedom for their girls, a community leader said on Friday.

Islamist militant group Boko Haram is suspected to have kidnapped scores of girls on Monday from a school in Dapchi village, Yobe state. Most are thought to be teenagers.

It would be the largest mass abduction since Boko Haram took more than 270 schoolgirls from the northeastern town of Chibok in 2014, sparking an online campaign that went viral and spurring several governments into action to try and find them.

Many of those girls remain in captivity, though some have escaped or been ransomed.

A roll-call at the school in Dapchi on Tuesday showed 91 students were absent, though estimates of the number of missing range from around 50 to more than 100. Parents said they have set up a committee in the village, which is around 100 kilometres (62 miles) from state capital Damaturu.

"We have compiled 105 names of missing girls which we intend to give to the Bring Back Our Girls people in (the capital) Abuja," said committee chair Bashir Alhaji Manzu, whose teenage daughter, Fatima Bashir, is missing.

The group would present its case to President Muhammadu Buhari, he said, adding that the group was angry with the government&39;s response to the kidnapping.

Boko Haram wants to create a state adhering to a strict interpretation of Islamic law. Its name roughly translates as "Western education is forbidden" in the Hausa language widely spoken in northeast Nigeria.

The group has killed more than 20,000 people and put over 2 million to flight since its insurgency began in 2009.

On Friday, Buhari said he was sending more troops and reconnaissance aircraft to look for them.

"This is a national disaster," he said. "We are sorry that this could have happened and share your pain." Earlier this week Buhari sent security forces and a ministerial team to the area.

"Some ministers came but they didn&39;t even speak with any parent, principal or teachers of the school," he said.

In a further sign of community anger, villagers confronted a convoy carrying Yobe state governor on Thursday when he said 76 girls reported to have been rescued were in fact still missing.

Amina Usman, a 15-year-old student, was among the pupils who escaped the attack on Government Girls Technical College.

She said she was washing when she heard gun fire and saw what appeared to be soldiers in vehicles. She fled when she realised that they were attackers and ran into the bush, later meeting a teacher and other escapees.

"We met other girls and the teacher counted all of us. We were 65 girls in all .... I thought I will never see my parents or family again," she said, adding that she was too scared to return to the school.

Kachalla Bukar, whose 14-year-old daughter was among those missing, said he had been told the insurgents fooled some students into thinking they had come to offer protection.

"When we went to school on Tuesday she was not among girls that have been found. Her colleagues ... gave us our daughter&39;s school box with her personal belonging .... That was when we realised our daughter is actually missing," he said.