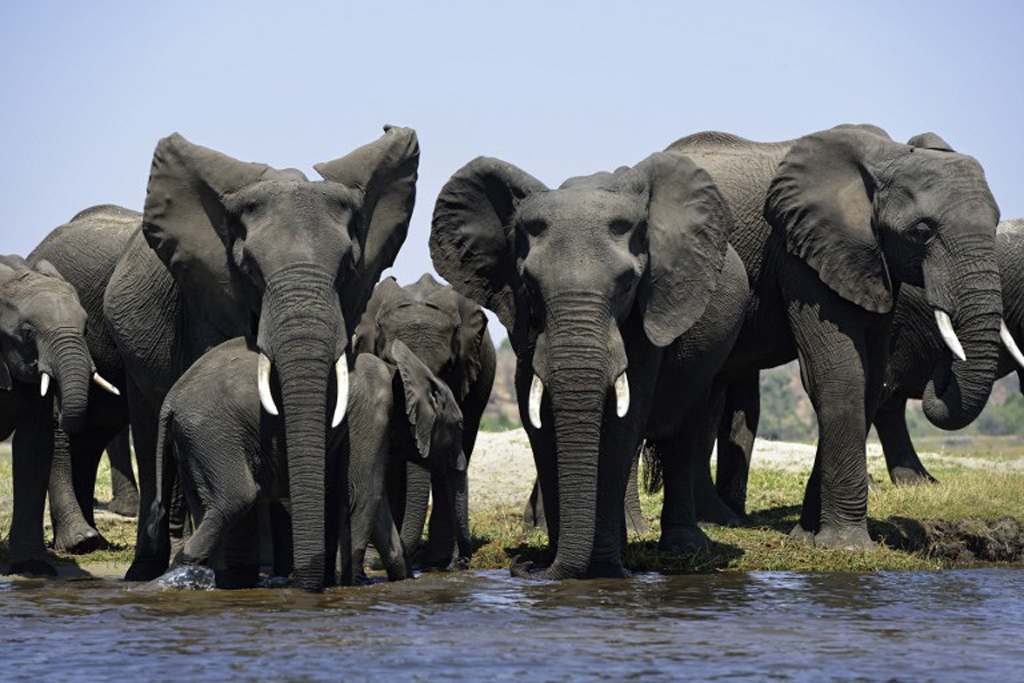 African elephants on a riverbank in the Chobe National Park in Botswana.

GABORONE – At least one poacher was shot and killed by the Botswana Defence Force (BDF) in a contact which drove several others across the border from Chobe National Park into Zimbabwe where two more surrendered to the police, days after losing their way back to Zambia in the jungle.

According to Trevor Lane of the Victoria Falls-based rhino conservation group Bhejane Trust, the two were badly dehydrated and exhausted when they handed themselves in at a safari lodge near the world-acclaimed resort town on Sunday.

“Two exhausted Zambian poachers handed themselves in to a safari lodge just outside Victoria Falls today. They are in bad shape. I think they have been lost for days in this heatwave after they were shot up by BDF in Botswana. They will have been part of the group responsible for sabotaging our No 3 solar pump (in Matetsi National Park), which was chopped with an axe as the poachers tried to get water. They have been taken for questioning,” Lane said in a statement on Sunday night.

The trust said the advent of patchy rains in the past few days had inspired “the usual influx” of poachers into the Matetsi (in Zimbabwe) and Chobe national parks (in Botswana).

The two Zambians, who are due to face poaching-related charges at a court in Victoria Falls, are believed to be part of a large group which escaped into Zambia after skirmishes with the BDF which killed one and possibly injured several suspects in Chobe National Park last Thursday.

“The BDF had a contact with the group of Zambians, killing one, possibly injuring a couple and the rest fled. It appears part of this group ended up in Zimbabwe, rather lost. They walked down a road (very unusual behaviour) and then reached the pump house at No 3 in the Chamabonda – I assume at night or in the early morning. They were desperate for water so they smashed the prodorite outlet pipe which allowed them to start pulling up the solar pump…

“While in Zimbabwe, the Zambians have managed to shoot one elephant to date, that we know of,” Lane said.

However, investigative sources said the two were co-operating with investigations and provided evidence that could lead to the smashing of a major cross-border poaching syndicate, numbering about 30 men.

Further, there were indications that every year, the group took advantage of the rainy season to conduct intensive rhino and elephant poaching operations in regional game sanctuaries including Hwange, Matetsi and Zambezi (Zimbabwe), Chobe (Botswana), Linyanti and Bwabwata (Namibia) national parks during the rainy season.

In March last year, it took the Zimbabwe Republic Police (ZRP) and parks game rangers three weeks to expel at least 30 Zambian poachers who killed more than 10 elephants in hit-and-run operations in the Zambezi, Hwange and Matetsi national parks.

In the same month, three Zambians were shot dead while poaching in Hwange National Park. In June 2014, a notorious Zambian poacher from the capital Lusaka was killed in a shoot-out with soldiers at Chobe National Park in Botswana.

According to statistics from the Zimbabwean ministry of Environment, Water and Climate, at least 22 poachers were killed and 900 others arrested in skirmishes with game rangers in 2015. The arrested included 876 locals and 44 foreigners.