Protests, a dead cow and a political message 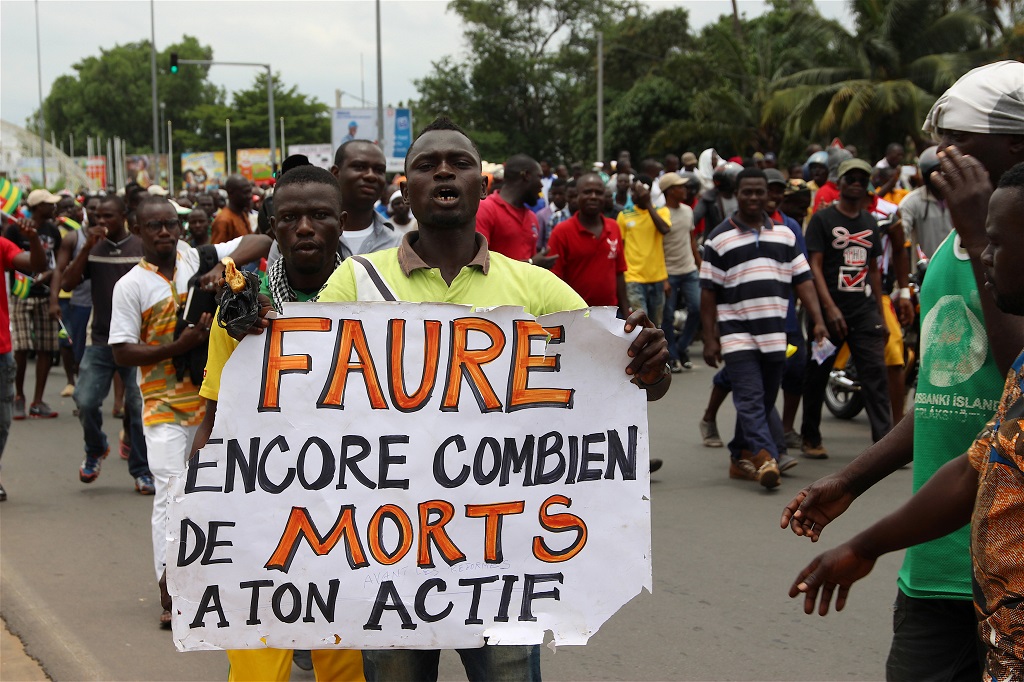 A man holds up a sign, which reads: "Faure still how many death by you", during an opposition protest calling for the immediate resignation of President Faure Gnassingbe in Lome, Togo, 6 September 2017

KPARATAO, Togo – The cow belonging to the butcher in Kparatao, northern Togo, was tied to a tree and minding its own business when the soldiers pumped it full of bullets.

Within days, the stricken animal became a symbol of the popular protests against President Faure Gnassingbe which have seen mounting calls for him to step down.

A photo of the white, long-horned beast sprawled in a pool of blood was shared widely on social media and sparked fevered reactions online for more than a week.

Its fate was even featured on national television's main evening news programme. But despite sparking a slew of online jokes, the killing is more than just a story and no laughing matter for the 6,000 or so inhabitants of Kparatao.

The village, some 340 kilometres due north of the capital, Lome, is where opposition leader Tikpi Atchadam grew up.

On September 19, the day before the last big nationwide demonstrations, Togo's military and police turned up in force in Kparatao.

They surrounded the village with pick-up trucks as an elite unit, the red berets, spread out conducting raids, asking questions and looking for "weapons of war". No stone was left unturned. They even checked under the bed of the traditional leader.

"Some of them wore balaclavas. They were very nervous," said one local elder, Agoro Wakilou. "We thought they'd come to kill us." Two people have been killed since the first protest took place in the neighbouring city of Sokode in late August and the situation remains tense.

#Togo - A cow attached to leash was shot to death for rattling soldiers conducting illegal search of home in Kparatao. A woman was injured ! pic.twitter.com/oQRbh6zyuK

Villagers dispute the claim the soldiers were about to leave when shots rang out, creating panic. The butcher's cow had been shot at point-blank range. "It was threatening the defence and security forces," said the police. Inevitably, news of the incident caused amusement online.

#Togo: A cow shot dead for rattling soldiers at the hometown of the opposition leader. Even animals want #Togo's 1992 constitution pic.twitter.com/CQAaTmItCm

Others paid tribute to what they said was "the latest victim of repression of Gnassingbe's dictatorial regime".

The news site Togomedias.com called the death a "political assassination". The wall of the butcher's house near where the animal was killed is riddled with bullet holes.

The butcher's wife, who was inside the house at the time of the shooting, was grazed by a bullet and spent three days in hospital.

"After the raids, the intimidation, it was the final straw. The village chief went to see the prefect to get compensation for the butcher," said Wakilou. Elders in Kparatao, where Atchadam thought was the best place to hide his family, now say they live in fear.

"They (the government) are threatening us because the opposition leader is from here," said one old man, dressed in a long white tunic, his eyes clouded by cataracts.

Comi Toulabor, head of research at the Institute of Political Studies in Bordeaux, has another theory about why the cow had to die.

For the military, Atchadam's spirit may have been in it, he said, adding: "Animist beliefs are still very common in Togo."

He drew parallels between the shooting and a well-known story that has circulated in Lome since the time of Gnassingbe's father, General Gnassingbe Eyadema. He was president from 1967 until his death in 2005.

"Every January 13 on the stroke of midnight since 1963, Eyadema used to assemble his officers at RIT camp in Lome and shot a cow to mark the assassination of Sylvanus Olympio, the first president of independent Togo," said Toulabor.

#Togo criminal regime isn't killing only kids but animals too. They felt threaten by this cow & they shot it. #FreeTOGO @UN #FaureMustGo pic.twitter.com/azNlUsj4uL

The general claimed to have personally fired the shot that killed Olympio. Toulabor said the story may sound outlandish but several senior army officers had confirmed it to him.

With neighbouring Benin, Togo is one of the birthplaces of voodoo and the former president "was always surrounded by all sorts of charm-makers and holy men", he added.

"Faure is carrying on this ritual even today." For Toulabor, the message was clear with pressure mounting for an end to Africa's longest-ruling political dynasty.

"The military wanted to symbolically kill Tikpi Atchadam," he said.