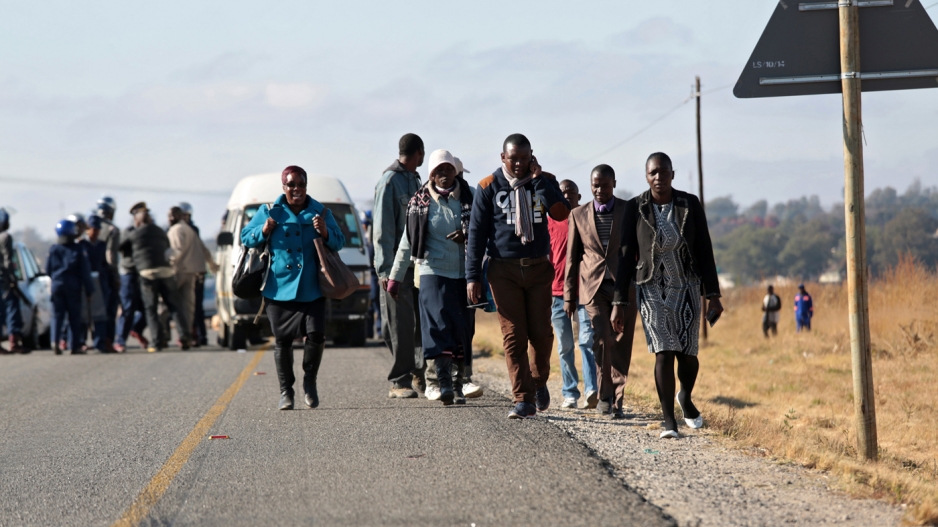 Stranded commuters walk on Mutare road outside Harare, Zimbabwe on July 4, 2016. Strikes have crippled the country.

Under Mugabe&39;s authoritarian rule, protests and strikes have been rare in Zimbabwe despite about 90 percent of the population being out of formal employment. The last similar protests took place in 1998 when riots erupted over the price of bread.

"This is a sign of economic collapse which has left people with nothing more to sacrifice and nothing to lose," Dumisani Nkomo, spokesman for the Crisis in Zimbabwe Coalition campaign group, told AFP.

"We are heading towards a tipping point as a country, where citizens will express their pain by any means."

There were few people on the streets of the usually bustling capital Harare after civil society organisations called the strike to pressure Mugabe to tackle economic woes.

"I can&39;t go to work when the rest of the country is not going to work," said Sybert Marumo, who works for an electrical shop.

"Life is tough and we need to show the government that we have been stretched to the limit."

Children were seen streaming home from school after teachers failed to turn up.

In some suburbs of Harare, protesters burned tyres and blocked streets to prevent cars from heading into the city centre.

The strike was the latest in a series of protests against Mugabe’s government as calls mount for the 92-year-old leader, who has been in power since 1980, to step down.

The Zimbabwe Lawyers for Human Rights (ZLHR) said police had arrested at least 20 people across the country.

Telecommunications, including internet and WhatsApp services, were erratic and the government regulator warned against anyone sharing "abusive and subversive material".

"All SIM cards in Zimbabwe are registered in the name of the user, so perpetrators can easily be identified," the Postal and Telecommunications Regulatory Authority said in a statement read on state television.

Anyone in possession of messages "that may be deemed to cause despondency, incite violence, threaten citizens and cause unrest will be arrested".

Mugabe&39;s government has delayed pay dates for civil servants as treasury funds run short after years of economic decline, worsened by a severe drought which has hit agriculture.

Police fired teargas to disperse people wherever they saw small gatherings, while the main bus ranks were deserted and commuters stranded.

Zimbabwe shuts down in peaceful protest against corruption https://t.co/JlMYlTBFeG

In the south-eastern town of Masvingo, police "fired warning shots at a crowd that had gathered near the bus rank", said Zivanai Muzorodzi, a spokesman for the civil society group Community Tolerance, Reconciliation and Development Trust.

"Shops are closed in all of Masvingo town and reports we are getting from other outlying areas such as Zaka, Jerera and Chiredzi suggest that people have heeded the strike call," he said.

"This shows people have no confidence in the government. The president promised them jobs but instead people are losing jobs, there is hunger and people are going to sleep on empty stomachs.”

RT @malungelob: Zimbabwe nationals have gathered around outside their consulate pic.twitter.com/aU69hhw5nd

Some of those arrested were injured after police set dogs on them, they added.

Last Friday around 70 people were arrested in Beitbridge town at the border with southern neighbour South Africa during protests over a ban on imports of basic commodities.