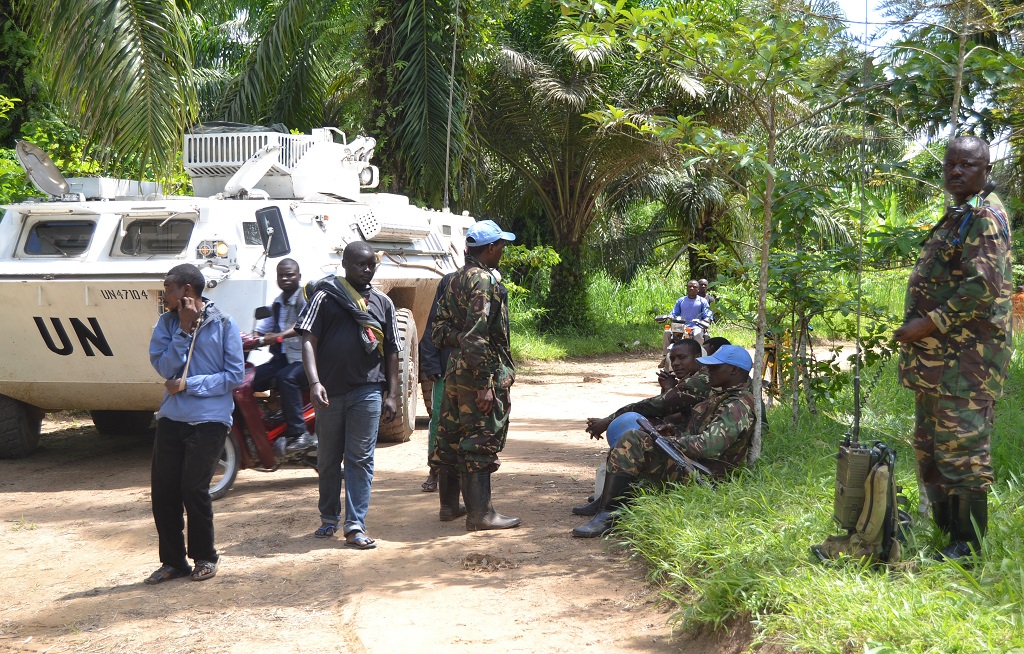 UN peacekeepers of the MONUSCO force stand next to a UN vehicle, after the bodies of seven people were found on May 9, 2015 in Matembo, 12 km from the city of Beni, in the North-Kivu eastern province.

GOMA – Suspected Ugandan rebels killed at least 14 Tanzanian U.N. peacekeepers and wounded 53 others in a raid on a base in Congo that U.N. Secretary-General Antonio Guterres on Friday called the worst attack on the organisation in recent history.

Tanzania&39;s President John Magufuli said he was "shocked and saddened" by the deaths, which come amid rising violence against civilians, the army and U.N. troops in Democratic Republic of Congo&39;s eastern borderlands.

The U.N. chief said the attack constituted a war crime and called on Congolese authorities to investigate and "swiftly bring the perpetrators to justice".

"I want to express my outrage and utter heartbreak at last night&39;s attack," Guterres told reporters at U.N. headquarters in New York. "There must be no impunity for such assaults, here or anywhere else."

State Department spokeswoman Heather Nauert wrote on Twitter that the United States was "appalled by the horrific attack".

U.N. troops were still searching for three peacekeepers who went missing during the more than three-hour firefight that broke out at dusk on Thursday evening, Ian Sinclair, the director of the U.N. Operations and Crisis Centre, said.

U.N. officials said they suspected militants from the Allied Democratic Forces (ADF) staged the assault on the base in the town of Semuliki in North Kivu&39;s Beni territory.

The ADF is an Islamist rebel group that has been active in the area. Congo&39;s U.N. mission, MONUSCO, said it was coordinating a joint response with the Congolese army and evacuating wounded from the base.

Five Congolese soldiers were also killed in the raid, MONUSCO said in a statement. Congo&39;s army said only one of its soldiers was missing, however, while another had been injured, adding that 72 militants had been killed.

Rival militia groups control parts of mineral-rich eastern Congo nearly a decade and a half after the official end of a 1998-2003 war in which millions of people died, mostly from hunger and disease.

The area has been the scene of repeated massacres and at least 26 people died in an ambush in October.

The government and U.N. mission have blamed almost all the violence on the ADF but U.N. experts and independent analysts say other militia and elements of Congo&39;s own army have also been involved.

In response to the growing unrest, and in an effort to protect civilians, the U.N.&39;s Under-Secretary-General for Peacekeeping Jean-Pierre Lacroix said MONUSCO had stepped up its activities in the area.

"They don&39;t want us there. And I think this attack is a response ... to our increasingly robust posture in that region," he told reporters.

Thursday&39;s raid was the third attack on a U.N. base in eastern Congo in recent months.

Increased militia activity in the east and centre of the country has added to insecurity in Congo this year amid political tensions linked to President Joseph Kabila&39;s refusal to step down when his mandate expired last December.

An election to replace Kabila, who has ruled Congo since his father&39;s assassination in 2001, has been repeatedly delayed and is now scheduled for December 2018.

Established in 2010, MONUSCO is the United Nations&39; largest peacekeeping mission and had recorded 93 fatalities of military, police and civilian personnel