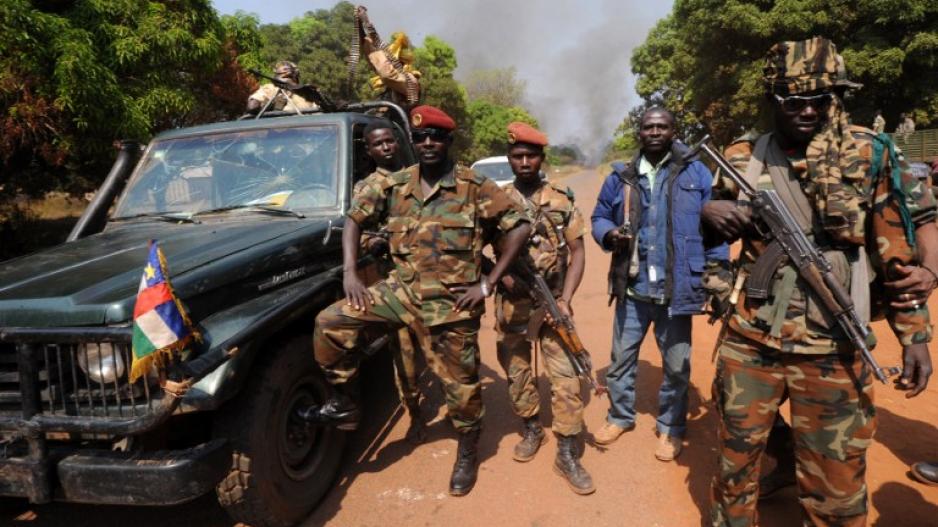 File: Seleka rebel coalition members, which launched a major offensive last month, hold a position in a village 12 kms from Damara, where troops of the regional African force FOMAC are stationed on 10 January 2013.

Bangui – Rebels in the Central African Republic said they had seized the presidential palace in the capital Bangui on Sunday after heavy fighting was reported there.

"We have taken the presidential palace. (President Francois) Bozize was not there," one of the rebel commanders on the ground, Colonel Djouma Narkoyo, said.

He said the rebels, who have vowed to topple Bozize, were planning to move on to the national radio station where rebel leader Michel Djotodia planned to make an address.

Gunbattles erupted around the presidential palace in the capital of the Central African Republic after rebels advanced into the city vowing to topple President Francoise Bozize.

Intense fighting started at around 8am before the gunfire became more sporadic.

Fighters in the Seleka rebel coalition advanced into Bangui on Saturday, ignoring a call for talks to avoid a "bloodbath", after the collapse of a two-month-old peace deal in the notoriously unstable and deeply poor former French colony.

"Today will be decisive," Colonel Djouma Narkoyo, one of the Seleka military commanders on the ground, said. "We call on our brothers in FACA (the Central African army) to lay down their arms," Narkoyo said.

"Our troops are around the palace. We are facing down the last forces loyal to President Bozize," Massi said.

Bozize, who himself launched a coup in 2003, has not issued any statement about the latest unrest.

Narkoyo had said the rebels were ready to meet with regional African leaders on the crisis on Saturday, but refused to negotiate with Bozize.

And he warned that if Seleka captured Bangui, it would set up a new government.

On Saturday, rebels said they had moved past a checkpoint that effectively marks the entrance to the capital, although a Central African military source denied the claim.

But Bangui resident Francis Komgdo, who lives near the checkpoint, told AFP the rebels had arrived in the area, some in vehicles others on motorbikes, occasionally firing in the air.

On Saturday Paris-based rebel spokesman Eric Massi said the rebel leadership was urging its forces on the ground to refrain from "looting or score-settling with the local population".

Gunfire and explosions on Saturday saw the streets of Bangui emptied as local people fled to their homes. Virtually the only traffic was military vehicles patrolling the main highways.

The UN Security Council on Friday voiced strong concern about the rebel advances "and their humanitarian consequences" amid reports of widespread summary executions, rapes, torture and the use of children in conflict.