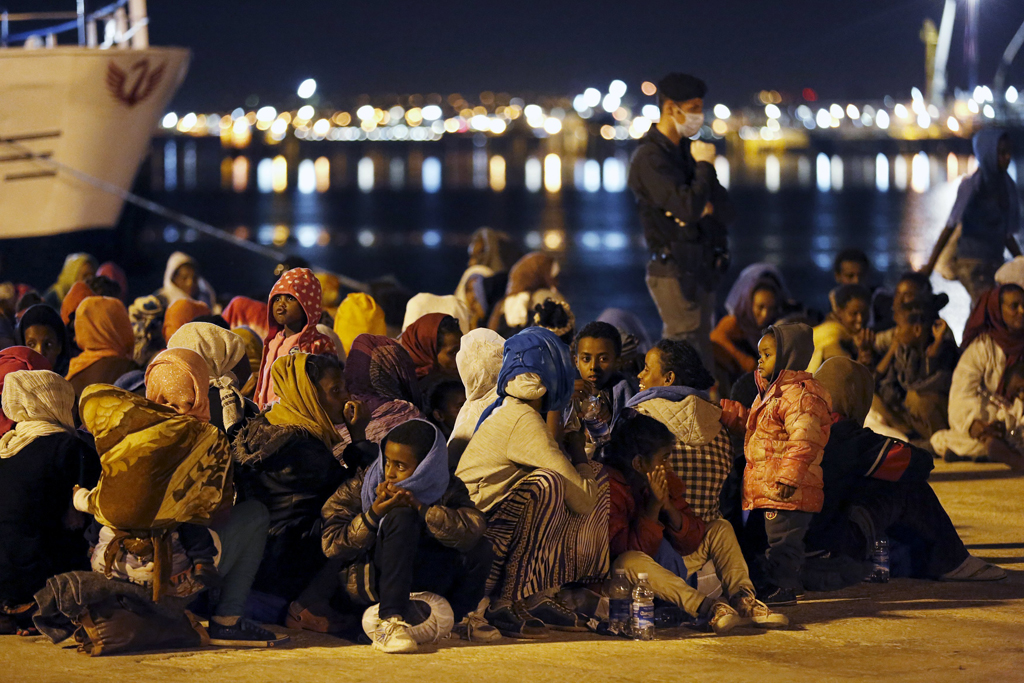 Migrants rest after disembarking from the expedition vessel Phoenix in the Sicilian harbour of Augusta, Italy, June 7, 2015. An international rescue fleet plucked almost 5,900 migrants from rickety boats at the weekend. REUTERS/Antonio Parrinello

The British warship Bulwark assisted in picking up more than 1,000 refugees, including 10 pregnant women, the Ministry of Defence said.

The Italian coastguard, which coordinates rescue efforts from Rome, said British, Swedish, Spanish and Italian ships and a merchant vessel had all been called upon to go to the aid of 15 different boats on Sunday, rescuing 2,400 people in all.

On Saturday, 3,500 migrants were rescued about 45 miles from the Libyan coast.

The tide of migrants and refugees risking the often deadly sea crossing to reach Europe from Africa is on the rise this year and the U.N. refugee agency estimates more than 1,800 have drowned. About 800 perished in a single shipwreck in April.

In response, the EU has bolstered its presence in the Mediterranean, but it is still debating how to handle the refugees and migrants once they are ashore.

All those rescued are being taken to Italian ports, which is creating tension between the government and local politicians from opposition parties, especially from the anti-immigrant Northern League, who say they cannot welcome any more migrants.

Roberto Maroni, the League&39;s president of the northern Lombardy region, which includes the financial capital Milan, said he would refuse to shelter more migrants, and that he would cut regional funding to cities that agreed to host them.

But Prime Minister Matteo Renzi said Maroni, a former interior and labour minister, was partly responsible for locking Italy into an unfair European Union treaty that requires asylum seekers to ask for refuge in the country where they first enter the bloc.

EU interior ministers are due to discuss a European Commission plan on June 16 to disperse 40,000 asylum seekers from Italy and Greece to other member states, and to bolster the enforcement of the treaty that Renzi wants changed.

"It&39;s unthinkable to continue to bring them all (migrants) to Italy," Renzi told reporters at a Group of Seven summit in Kruen, Germany. "There is an immigration problem. To tackle it, we need the strength and courage to make ourselves heard at European meetings."

The turmoil in Libya, which has become one of the main transit routes to Europe, is giving free rein to people smugglers.

During the first five months of the year, there were 46,500 sea arrivals into Italy, a 12 percent increase on the same period of last year, the office of the United Nations High Commissioner for Refugees said. Italy&39;s government projects that 200,000 in all will come this year, up from 170,000 in 2014. (Editing by Kevin Liffey)