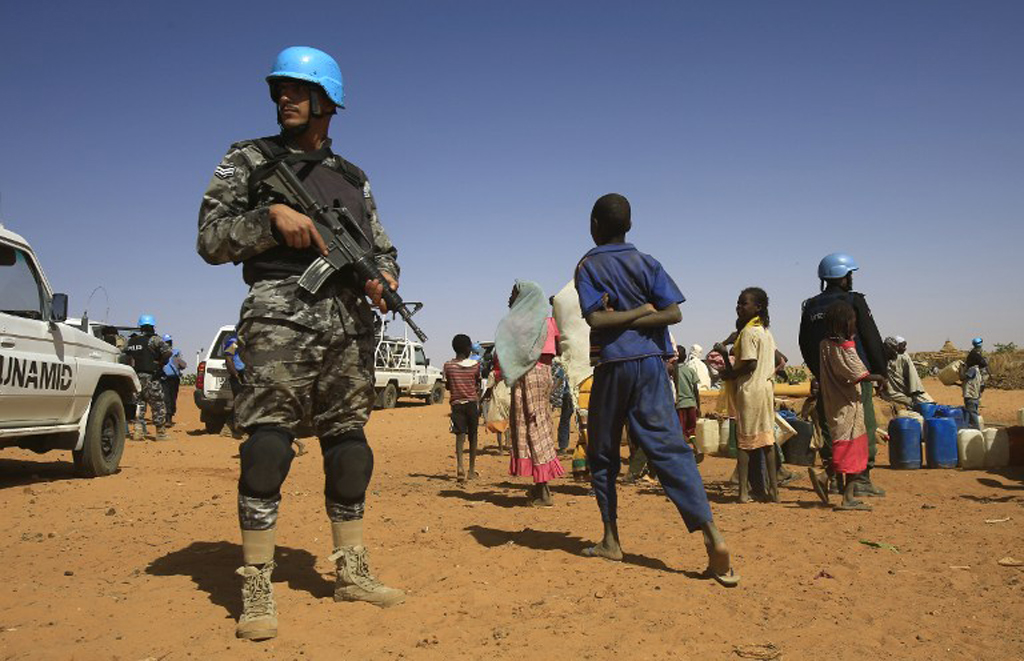 Sudanese people walk past a member of the UN-African Union mission in Darfur (UNAMID) at the Zam Zam camp for Internally Displaced People (IDP), North Darfur, on April 9, 2015.

NAIROBI - UN peacekeepers cowered in their bases rather than risk doing their job of protecting civilians during an outbreak of fighting in South Sudan in July, a rights group said on Wednesday.

Some peacekeepers in the capital Juba abandoned their posts inside "Protection of Civilian" sites - where tens of thousands have sought safety from successive bouts of fighting - while outside the fortified bases, peacekeeper presence was "non-existent."

They refused to help when foreign aid workers were attacked and some of them gang-raped in a hotel close to a UN base.

"The United Nations needs to ensure transparency and accountability for the inadequate response of its peacekeepers," the Washington-based Center for Civilians in Conflict (CIVIC) said in a statement.

CIVIC also called for a UN arms embargo on South Sudan, which gained independence in 2011 and was plunged into conflict in December 2013, when President Salva Kiir accused his former deputy Riek Machar of plotting a coup d'etat.

A patchily implemented August 2015 peace deal saw Machar return to the capital earlier this year, but fresh fighting between his forces and government soldiers loyal to Kiir erupted in July.

Civilians died both inside and outside the UN bases and soldiers outside raped many women - some within sight of UN sentries.

The failings in July were nothing new, CIVIC said.

The group previously investigated an incident in February, when peacekeepers from Ethiopia, India and Rwanda stood by as government soldiers attacked another Protection of Civilian site in the northern town of Malakal, killing at least 30 civilians.

Months later, the UN admitted to peacekeeper "inaction, abandonment of post and refusal to engage" during the Malakal attack, but failed to hold any commanders or troops to account.

CIVIC said the UN Mission in South Sudan (UNMISS) is hampered by "inadequate support" from UN headquarters and has been "repeatedly blocked, harassed, and, at times, even attacked by the parties to the conflict."

UN peacekeeping officials said the report "raises a number of important issues," noting that an independent investigation of the Juba violence is due to present its findings shortly.

The UN sites offering civilians refuge were "unsustainable and cannot provide a reliable option for the physical security" of tens of thousands of South Sudanese, the peacekeeping department said in a written response.

"The investment we urgently need to make and prioritise in South Sudan is putting the peace process back on track," it added.

Rebel leader Machar is currently exiled in Khartoum, from where he has called for "armed resistance" against Kiir's government.