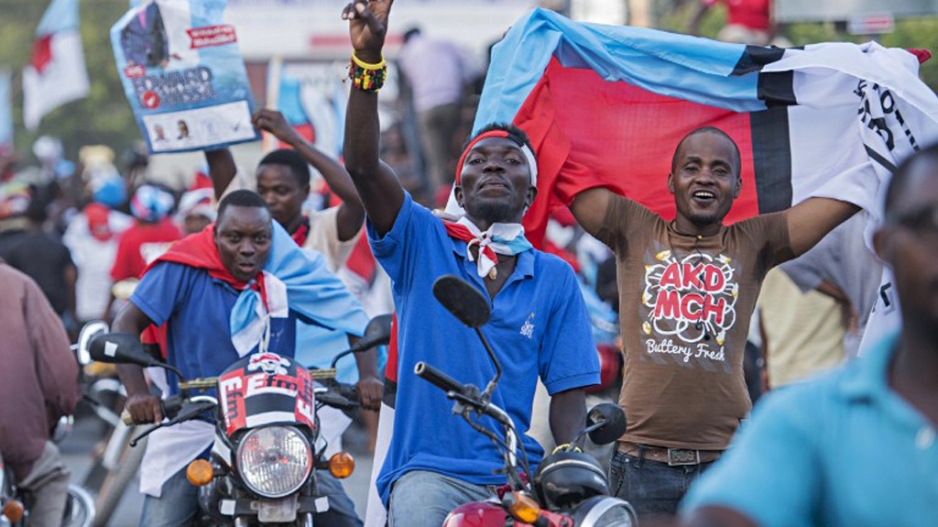 Supporters of the opposition Chadema party celebrate outside a polling station in Dar es Salaam,

Zanzibar Electoral Commission (ZEC) chairman Jecha Salum Jecha, in a statement broadcast on public television, said the polls on the Indian Ocean archipelago were "nullified" and must be carried out again. Jecha alleged violations including double-voting and cheating.

Tanzania&39;s ruling party presidential hopeful held a narrow lead Wednesday with around half the votes counted in the country&39;s tightest ever election.

With 133 of 264 constituencies having released results on the third day of counting in east Africa&39;s most populous country, John Magafuli of the long-ruling Chama Cha Mapinduzi (CCM) had won 56.51 percent of votes.

His nearest rival in Sunday&39;s presidential vote, Edward Lowassa of the opposition Chadema party, has 41.67 percent, according to official results announced by the National Election Commission (NEC) late Tuesday.

In Zanzibar, the semi-autonomous archipelago which also voted for its own leader, the main opposition presidential candidate declared himself the winner on Monday, ahead of any official announcement of results.

Security forces on Tuesday surrounded the islands&39; main tallying and results centre after opposition challenger Seif Sharif Hamad of the Civic United Front (CUF) repeated warnings that he "will not concede defeat if robbed of my victory."

The ruling party has effectively held power since Tanzania&39;s independence from Britain in 1961 but has suffered a series of defeats at the parliamentary level in this week&39;s election, with eight ministers and other veteran politicians losing their seats.