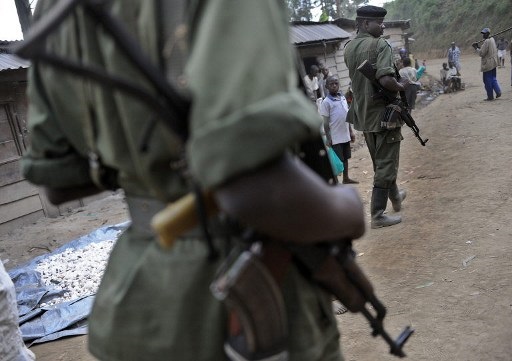 Democratic Forces for the Liberation of Rwanda (FDLR) soldiers patrol Lushebere in the Massasi district, eastern DRCongo, in 2008. A senior FDLR officer has been arrested in DRC.

The rights watchdog confirmed 104 cases of illegal detention and torture in Rwandan military detention centres between 2010 and 2016, according to the 91-page report, which estimates the true figure is much higher.

It said that systematic torture by the military was often ignored by judges and prosecutors when complaints were made.

"Research over a number of years demonstrates that military officials in Rwanda can use torture whenever they please," said Ida Sawyer, the Central Africa director of HRW.

READ: Critic of Rwandan president taken from home by police

The group's research found that most victims were detained on suspicion of being members of the FDLR –- a predominantly Hutu rebel group based in eastern Democratic Republic of Congo -– with some of its members suspected of participating in the 1994 genocide.

Others were suspected of having ties to the Rwanda National Congress (RNC), an opposition group in exile composed mainly of former members of Rwanda's ruling party, or to the jailed Victoire Ingabire, president of a banned opposition party.

'I was going to die'

One former detainee told HRW how soldiers placed a plastic bag over his head so he could not breathe.

"I accepted (everything they told me to accept) because I was going to die. Then they stopped. I signed a document they put in front of me," he said.

The report comes just two months after a HRW investigation showed security forces, including soldiers, executed at least 37 petty offenders instead of prosecuting them.

A government press conference to address the previous report was due to be held on Tuesday but was cancelled at the last minute.

Rwandan President Paul Kagame has been in power since 2000 and won a third term in August with nearly 99 percent of the vote, after amending the constitution to remove term limits.

He is hailed for economically transforming Rwanda after a genocide in 1994 that ravaged the country, but is criticised for clamping down on media freedom and the opposition while rights groups accuse his government of ruling through fear.

Earlier this month, Diane Rwigara, a prominent critic of Kagame who was blocked from running in the election, was detained and charged with inciting insurrection against the state. She is due back in court on Wednesday.