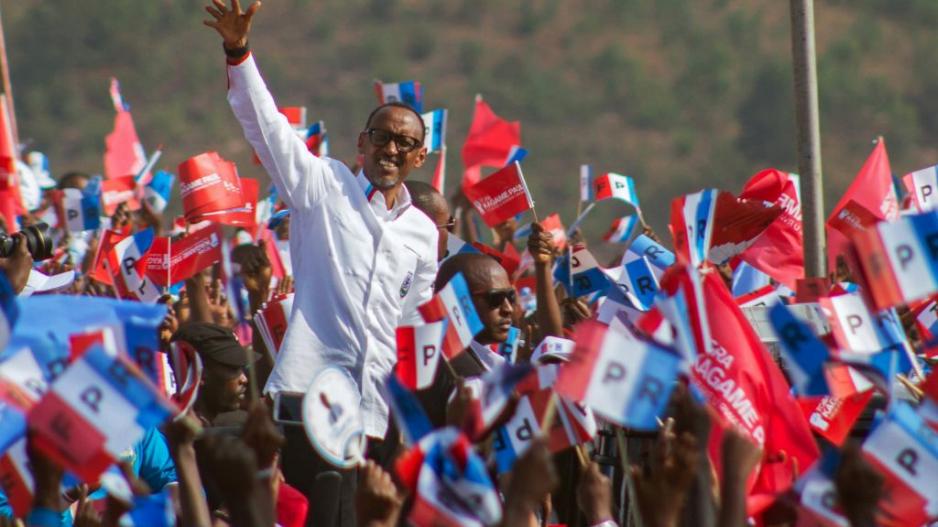 There had been little doubt that the 59-year-old would return to the helm of the east African nation which he has ruled with an iron fist since the end of the 1994 genocide.

With 80 percent of results counted, Kagame had secured some 5.4 million votes, far more than the 50 percent plus one required for him to win re-election.

"We think that at this level... it will be the same result, no change after having counted 100 percent (of votes)," said national elections commission chairman Kalisa Mbanda. Full provisional results will come through later Saturday.

The commission estimates 97 percent of 6.9 million voters turned out to cast their ballots.

Of the results tallied, Kagame had 98.66 percent -- a figure which could still shift slightly -- while his two little-known rivals barely made a dent.

cartoon from Kenya's @TheStarKenya newspaper is a reminder that (as he heads to election victory)not everyone is sure abt President Kagame pic.twitter.com/FjwZ16gXW7

Around the country Rwandans gathered to hear the results, with some celebrating an early win for Kagame. At a gymnasium in the capital loud music blared and traditional dancers took to the floor to entertain several hundred people.

Kagame has been the de-facto leader of Rwanda since, as a 36-year-old, his rebel army routed extremist Hutu forces who slaughtered an estimated 800,000 people -- mainly minority Tutsis -- and seized Kigali in 1994.

READ: 'Climate of fear' ahead of Rwanda vote: Amnesty International

The lanky former guerilla fighter is one of Africa's most divisive leaders, with some hailing him as a visionary while critics see a despot aiming to become one of the continent's presidents-for-life.

Kagame is credited with a remarkable turnaround in the shattered nation, which boasts annual economic growth of about seven percent, is safe, clean and does not tolerate corruption. Rwanda also has the highest number of female lawmakers in the world.

However rights groups accuse Kagame of ruling through fear, relying on systematic repression of the opposition, free speech and the media.

Kagame's critics have ended up jailed, forced into exile or assassinated. While few Rwandans would dare to openly speak against him.

Those who praise him, do so with adulation.

"He freed the country, he stabilised the country. Now we can walk anywhere day or night without problems," Jean Baptiste Rutayisire, a 54-year-old entrepreneur, said at a polling station in Kigali.

"He is an exceptional man. You don't change a winning team." Like many other voters AFP spoke to, Rutayisire didn't know the names of the other candidates.

READ: Kagame should step down when term ends - US

Despite facing an unwinnable battle against Kagame in which opponents had only three weeks to campaign, Habineza was upbeat after voting earlier.

More than a million people have turned up at Kagame's last rally near Kigali, a crowd size unprecedented in Africa pic.twitter.com/1onj2fgvQR

"For the first time since 23 years an opposition party has been in the ballot," he told AFP. Previously only independents and parties allied with Kagame fielded candidates.

Kagame's win comes after 98 percent of Rwandans approved a constitutional amendment in a 2015 referendum that granted him the right to run for a third term in office.

Observers condemned the reform, which could potentially see Kagame retain office twice more if re-elected this time and allow him to stay president until 2034.