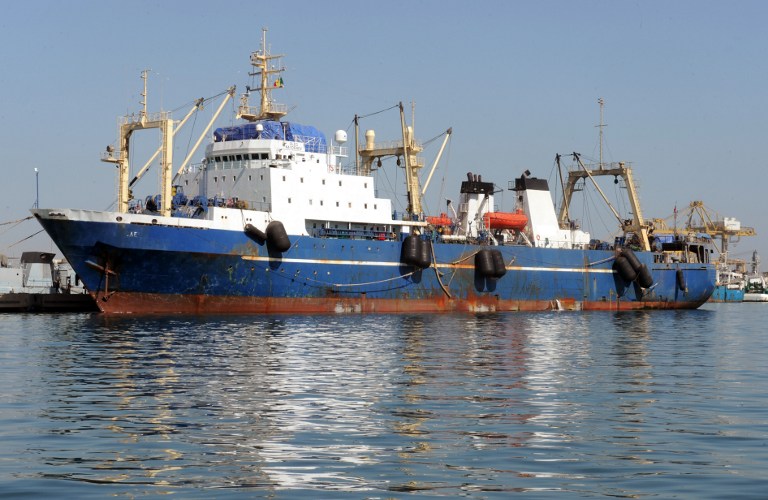 A Russian trawler "Oleg Nadenov",is moored in Dakar on January 5, 2014. The ship was boarded after it was observed illegally fishing in Senegalese waters near the border with Guinea Bissau.

DAKAR - Two weeks after impounding a Russian trawler accused of illegal fishing in its waters, Senegal has not blinked in the face of huge diplomatic pressure.

At the centre of the acrimonious spat between Dakar and Moscow is a renowned environmentalist turned minister who is used to fighting for the west African nation&39;s waters and looks unlikely to back down in his latest battle.

"We will apply (the law) in full force to protect our resources," said Fisheries Minister Haidar El-Ali, describing illegal fishing as "the cause of enormous damage to our economy and especially to our food security".

Senegal captured the 120-metre (394-foot) Oleg Neydanov in the Atlantic on January 4 after accusing it of repeatedly fishing in its waters without a permit.

The incident has created a furore in Russia&39;s state media over what Moscow views as discrimination against its nationals by a small African state.

According to the Russian press, the privately owned ship was carrying 62 Russians and 20 crew from Senegal&39;s neighbour Guinea-Bissau when it was boarded.

The Russian Federal Fisheries Agency has denied Senegal&39;s accusations and its representatives are in negotiations to end the stand-off, while the Russian foreign ministry has demanded the release of the crew and the ship.

But that could just be the beginning.

"The Oleg Neydanov is a repeat offender. So we asked for a fine of 400 million CFA francs," he said.

Senegalese law also allows the authorities to seize the ship&39;s cargo and equipment, thought in this case to amount to "at least 1,000 tonnes of fish worth 1.5 billion CFA francs", according to the minister.

Dakar has also proposed a further fine of one billion CFA francs to compensate for losses to the fishing community and another of 500 million for another Russian vessel accused of illegal fishing.

El-Ali said the crew of the Oleg Neydanov were free to return home whenever they wanted.

A Senegalese source close to the case said however that the sailors did not dare leave the boat for fear of losing their pay or being unable to get home and being stuck in Senegal.

For generations of Senegalese, fishing has provided a key part of their diet and an important means of keeping the country afloat.

After his appointment to the cabinet, El-Ali cancelled the licences of more than 20 foreign trawlers amid growing resentment among local fishermen whose 30-foot "pirogues", or dugout canoes, could not compete with a heavily subsidised European Union fleet of 10,000-tonne factory ships.

But non-EU trawlers are continuing to overfish the coastline, and families are finding it increasingly difficult to source the main ingredient for Senegal&39;s national dish, a fish and rice meal known as "tieboudienne".

According to experts, many fish consumed by the Senegalese are now caught off neighbouring Mauritania and Guinea-Bissau, while fishermen remaining in Senegal&39;s waters are having to go on increasingly long expeditions to make a living.

Guinea-Bissau, which shares a maritime area with Senegal, claims to have issued the Oleg Neydanov a fishing license and has demanded an explanation from Dakar over the seizure.

"Since the beginning of this case, I have communicated with my counterpart in Guinea-Bissau.... We understand each other perfectly," El-Ali said.

He dismissed allegations in the Russian media that he was involved in Greenpeace.

"That&39;s rubbish. I&39;m glad that NGOs such as Greenpeace, Sea Shepherd come to witness the management of fisheries in the context of surveys, of studies, censuses, but I am a member of neither the one nor the other," he said.

On Thursday the president reaffirmed his confidence in El-Ali, asking him to come up with proposals before April for new legislation which would be "much stricter against pirate ships".

In the case of the Oleg Neydanov, El-Ali has not looked like backing down, saying that "the law with us".

He pointed to losses estimated at 150 billion CFA francs a year, while insisting that the current spat was "a problem with a private boat, not a problem with the Russian government".