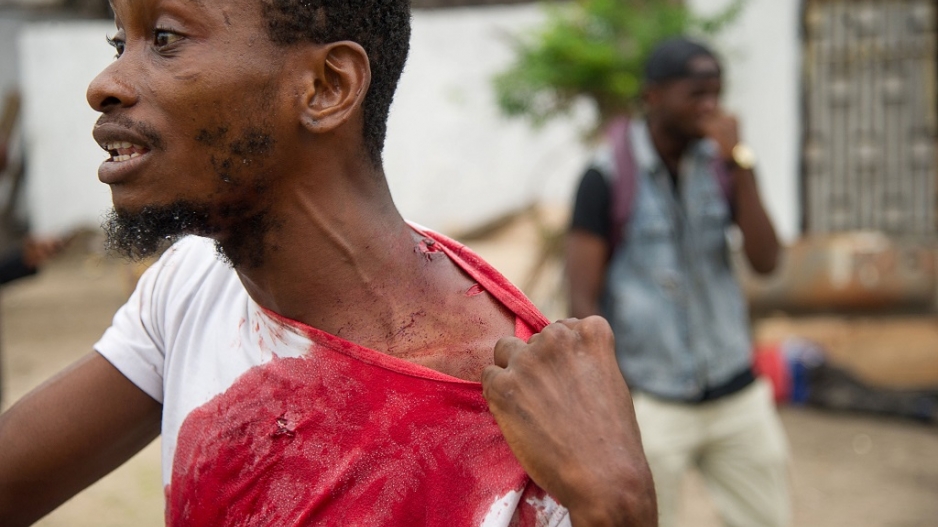 A man shows his injuries on 20 Sept. 2016 near the offices of the DRC's main opposition UDPS party offices. Several people died in a second day of violence in DRC on Tuesday, a day after bloody protests during which reports say over 50 people died.

KINSHASA - Several people died in a second day of violence in DR Congo Tuesday, with three opposition HQ buildings torched in a fresh bout of clashes between police and opponents of President Joseph Kabila.

The renewed violence came after a bloody day on Monday during which opposition groups said more than 50 people had died in protests calling for Kabila&39;s resignation.

The national secretary of the main opposition group blamed a "commando" unit from the regime for torching the opposition headquarters buildings.

"Does a normal state respond with reprisals?" said Felix Tshisekedi from the Union for Democracy and Social Progress (UDPS).

At least two burnt bodies could be seen in the fire-ravaged UDPS offices. Two others were burned alive and another injured, AFP journalists said.

Fire was still raging at the building where a tearful woman in her 40s said that her husband had been there when unidentified assailants attacked the building.

By early morning, the flames were dying down at the other two headquarters buildings -- belonging to the Forces of Union and Solidarity (FONUS) and the Lumumbist Progressive Movement (MLP) in the north of the capital Kinshasa.

A FONUS member said that armed men in civilian clothes arrived at the office in a jeep, sprayed petrol and set the building on fire.

Despite protests intensifying, Kabila&39;s yet to call on the army. With good reason. DRC RDC https://t.co/hvBnjReLtp pic.twitter.com/fFmgTEMzxH

Jose Maria Arnaz, the director of the Joint Office of the United Nations for Human Rights in DR Congo, inspected the UDPS office to "investigate" the fire.

"We are seeing what we can do to reduce the political tensions and bring those responsible for deaths to justice," he told AFP.

Monday&39;s violence started just before an opposition rally by demonstrators who fear Kabila -- who has ruled the Democratic Republic of Congo since 2001 -- is planning to extend his rule unconstitutionally.

Former colonial ruler Belgium bled the mineral-rich central African nation dry and it has been wracked by unrest since independence in 1960. It has never known a peaceful transition of power.

The government had put the toll from Monday&39;s violence at 17 but warned it could rise further.

The opposition said that security forces fired live ammunition into protesters and urged supporters to pour onto the streets again to demand Kabila step down when his term expires.

It urged people "to keep up without hesitation the demands."

The clashes were the worst violence in the capital since January 2015 when a police crackdown on another opposition protest left several dozen people dead.

Kabila&39;s mandate ends on December 20 and although the constitution bans him from running again, he has made no effort to schedule elections, fuelling fears he will attempt to cling on to power.

In May, the Constitutional Court said Kabila could remain in office in a caretaker capacity until an election is held, triggering a wave of angry protests.

READ: DRC President Joseph Kabila can remain in office without a vote: ConCourt

France and Belgium have voiced concern over the unrest and urged political forces to organise an election quickly.

A fringe opposition group has been meeting with the government in a bid to organise a schedule for elections, but veteran opposition leader Tshisekedi has refused to participate in the talks which are due to end on Saturday.

.@US_SEGL: US is monitoring the situation in DRC seriously & condemns violence on all sides. USonGreatLakes

They also called on the UN rights council to create a Commission of Inquiry to investigation the violations in Burundi, as well as allegations that cross-border armed groups are operating in the country and that other states may be implicated.

And they asked the UN General Assembly to consider whether Burundi could remain a Human Rights Council member -- marking a first in the council&39;s decade-long history.