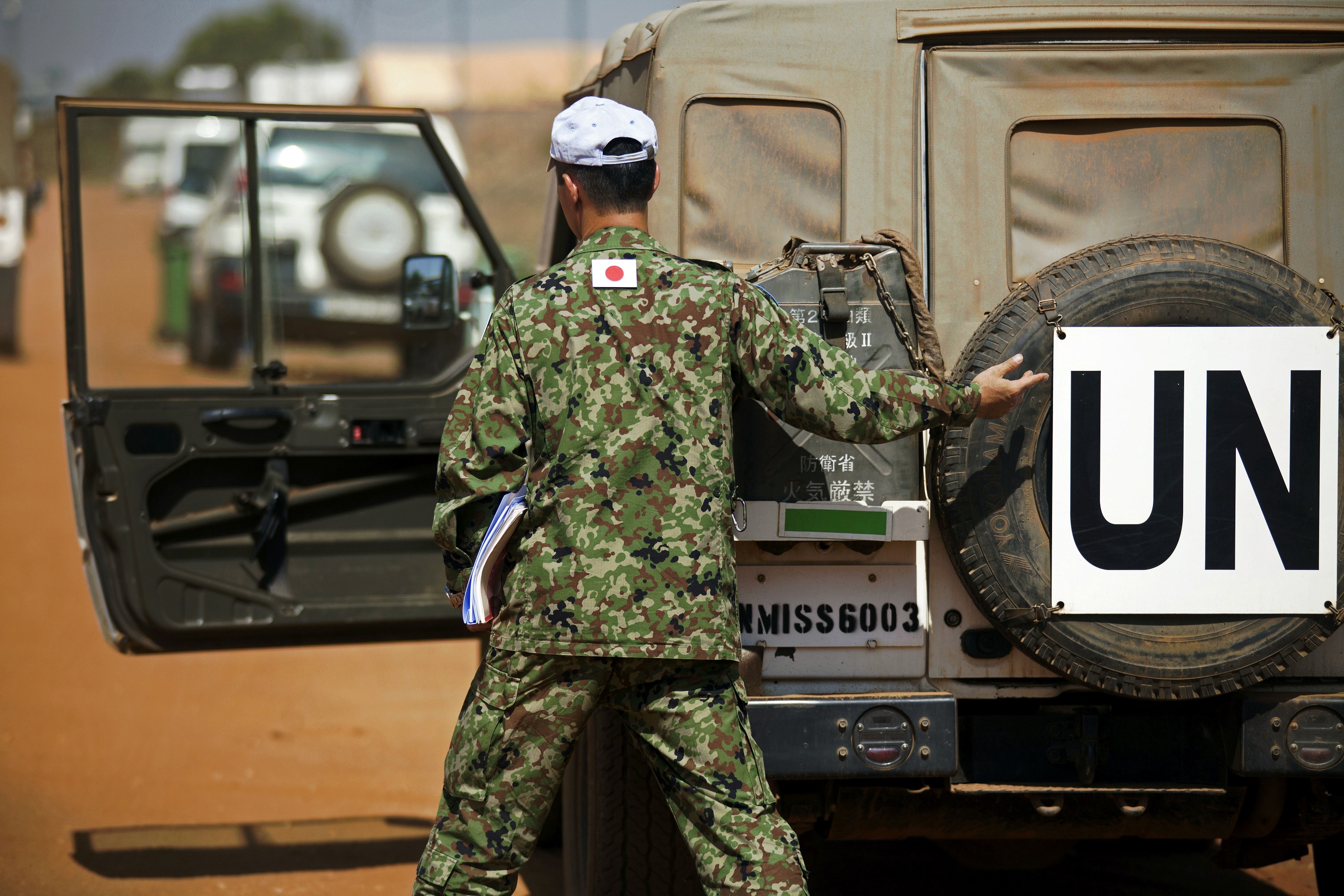 A member of the Japanese Ground Self-Defence Force prepares the arrival of new troops at the compound of the United Nations peacekeeping mission after they arrived in Juba, South Sudan, on November 21, 2016.

NAIROBI - Six aid workers have been killed in an ambush in South Sudan, the UN said Sunday, in another blow to humanitarian efforts a country suffering from war-induced famine.

A humanitarian source told AFP the victims -- three Kenyans and three South Sudanese working for a local aid group -- were killed on Saturday as they travelled in convoy from the capital Juba to the eastern town of Pibor.

Unknown assailants stopped the car, forced them out and then they were "shot and killed," the source said, speaking on condition of anonymity.

It has also displaced about 2.5 million people and created a devastating humanitarian crisis, including a famine that has already affected 100,000 people and is threatening to reach up to a million.

"I am appalled and outraged by the heinous murder yesterday (Saturday) of six courageous humanitarians in South Sudan," said Eugene Owusu of the UN humanitarian agency OCHA in a statement.

"At a time when humanitarian needs have reached unprecedented levels, it is entirely unacceptable that those who are trying to help are being attacked and killed."

According to OCHA, it was the highest number of aid workers killed in a single incident since the conflict began in December 2013 in the world's youngest country.

David Shearer, the special representative of UN chief Antonio Guterres in South Sudan, said the killing took place in government-controlled territory and urged authorities to "investigate and apprehend the killers."

"This cold-blooded killing is utterly reprehensible, not least, because these aid workers were dedicated to alleviating the ongoing suffering of the people of South Sudan," he said in a statement.

The ambush follows two other attacks on aid workers this month.

6 aid workers killed in #SouthSudan on Saturday, meaning at least 79 have lost lives since Dec '13. Outrageous.

On March 14, a health worker and a patient were killed in an attack on a humanitarian convoy responding to a cholera outbreak in the central town of Yirol.

And four days earlier, local staff of an international NGO were detained by armed rebels and released four days later during fighting in the northern area of Mayendit, OCHA said.

The agency said at least 79 aid workers have been killed in South Sudan since December 2013.

This year alone, 12 have died and at least eight humanitarian convoys have been attacked.

Observers have accused the government of using starvation as a battlefield tactic.

A leaked report by UN investigators said last week it was no coincidence that areas afflicted by famine are opposition areas, home to mostly ethnic Nuer and controlled for the most part by rebels.

Michele Sison, deputy US representative to the UN, on Thursday told a Security Council meeting that the government's obstacles to humanitarian work in the famine-struck areas "may amount to deliberate starvation tactics."

South Sudan's leaders fought for decades for independence, but once it was achieved in 2011, the fighting turned inward.

A long-standing power struggle between President Salva Kiir and his former deputy Riek Machar sparked fighting in Juba in December 2013 which quickly turned into a wider conflict between Kiir's Dinka supporters and Machar's Nuer community.

Since then the fighting has spread across the country and among ethnic groups jockeying for political and military advantage and to protect their communities.

On Thursday, UN chief Guterres denounced "a refusal by the leadership to even acknowledge the crisis or to fulfil its responsibilities to end it".

Regional peace efforts have borne no fruit and the UN has been unable to push through an arms embargo.

According to OCHA some 7.5 million people in South Sudan are in need of humanitarian assistance.