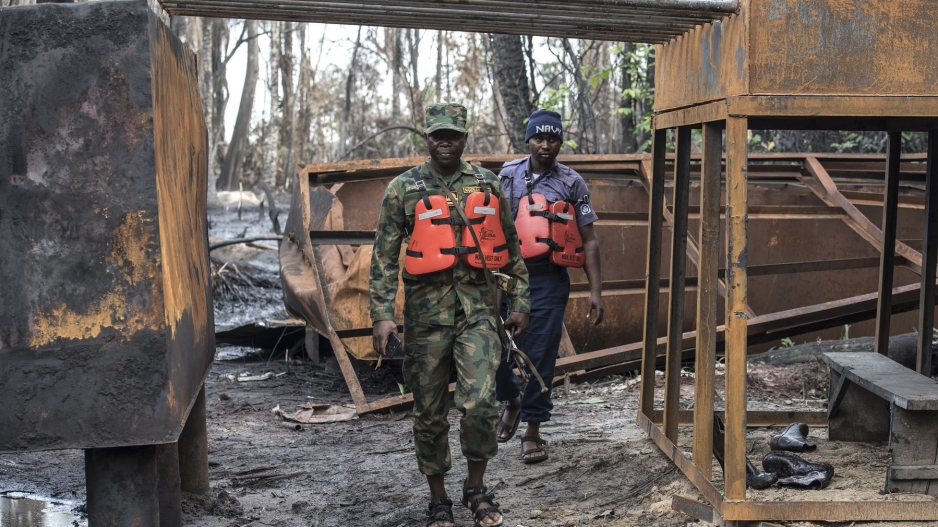 Members of the NNS Pathfinder of the Nigerian Navy forces inspect a destroyed illegal oil refinery was on April 19, 2017 in the Niger Delta region near the city of Port Harcourt.

WARRI, Nigeria – One soldier was killed and several others injured in an attack on military personnel in Nigeria's oil-rich south, a security source said on Thursday, in the second incident this month in the restive region.

The attack happened in the early hours of Thursday in the Ogbogbagbene community, southwest of the Delta state capital Warri, according to locals.

A source at Nigeria's Department of State Security intelligence agency said it was not immediately clear whether those responsible were "militants or just hoodlums".

"But they killed a soldier, injured others and carted away arms and ammunition, as well as a military gunboat," he said, adding that the injured were being treated in hospital.

There was no immediate response from the military joint task force that handles security in the region when contacted by AFP.

One woman who lives locally said people "heard gunshots by the waterside where the army formation is stationed at about 2:00 am (0100 GMT) this morning, only to realise that the army was under attack".

Angodi Akpo, who sits on the Burutu local council, said the community was "under siege" because of fears of reprisals.

"Everyone is apprehensive and is locked indoors over the likely action of the military following the attack, as the security operatives are harassing innocent residents in the guise of searching for the culprits," he added.

Twelve days ago two soldiers were killed at Sapele in Delta state, where there was also a similar attack in May that left four marine police officers dead.

The Niger Delta region, which includes Delta state, is home to Nigeria's multi-billion-dollar oil and gas industry and has frequently been hit by unrest.

Militants have periodically mounted attacks on oil and gas infrastructure as part of their calls for a fairer share of profits from the sector for local people, most of whom live in dire poverty.

After repeated attacks in 2016 that hit oil production, the government initiated talks with rebels, leading to a fragile truce and promises of improvements in the impoverished region.