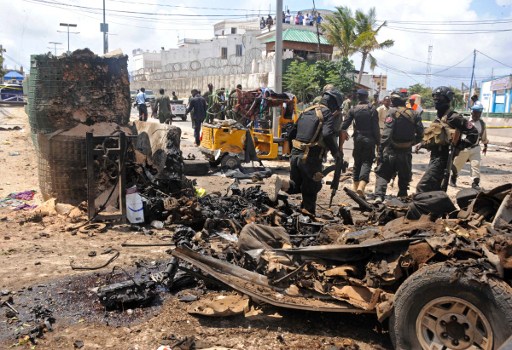 Somali security investigate the scene of a suicide attack in Mogadishu on July 31, 2016. Six people were killed in a gun and car-bomb assault on a police building in the centre of the Somali capital that also left seven assailants dead.

"The number of the people who died in the blast reached 15 and 45 others were wounded, most of them lightly," said Mogadishu police chief Bishar Abshir Gedi.

He said civilians and security forces were among the dead in Tuesday&39;s attack.

Several journalists who were at the hotel at the time of the attack were injured.

A vehicle rammed through a checkpoint on Tuesday and was fired on by security forces before it exploded outside the SYL hotel.

An earlier toll stood at five killed and 28 injured.

The hotel is situated close to the main entrance to the Villa Somalia government complex that includes the presidential palace, ministry buildings and residences.

A witness described seeing a large blast and a thick plume of smoke that rose high into the air.

"I saw a car speeding towards the area and huge smoke and fire went up in the sky," said Elmi Ahmed.

The explosion left a scene of widespread damage with a crater in the road, buildings damaged, nearby walls collapsed and debris scattered across the usually busy carriageway.

The Al-Qaeda aligned Shabaab jihadist group said it was responsible for the attack.

The fortified hotel, popular with government officials, business people and visiting diplomats and delegations, was previously attacked in both February this year and January last year.

Last week gunmen detonated a bomb outside a beachside restaurant before storming inside and killing at least seven people.

The jihadists have also staged repeated attacks in neighbouring Kenya and a recent security analysis warned the group was expanding its horizons with cells active in Djibouti, Ethiopia, Kenya, Tanzania and Uganda as well as Somalia.