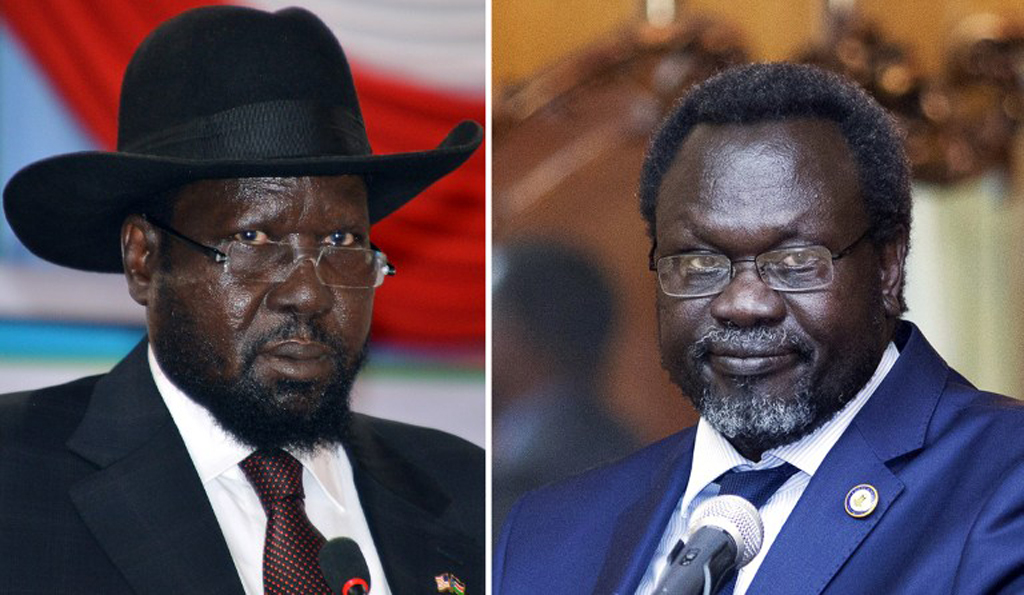 A combination of file pictures made on February 1, 2014 shows South Sudan President Salva Kiir (L) on June 2, 2014 in Juba and leader of South Sudan's largest rebel group and former vice-president Riek Machar (R) on May 9, 2014 in Addis Ababa.

JUBA - South Sudan&39;s vice president and former rebel leader Riek Machar has no plans for an imminent return to Juba, his supporters said Friday, accusing his rival President Salva Kiir of trying to oust or even kill him.

Machar has not been seen in public since he left the capital after days of intense fighting earlier this month between rival troops that left over 300 people dead and threatened to torpedo a shaky 2015 peace deal.

His movement, known as the SPLM/A (IO), issued a statement reaffirming its support for Machar and denouncing what it said were government efforts to replace him with Taban Deng Gai, who was the chief negotiator for the former rebels during the peace talks.

Any attempt to change Machar&39;s role as chairman and commander in chief of the SPLM/A (IO) "is totally rejected".

"It will deal a devastating blow" to the August 2015 peace accord which ended a near two-year civil war, and the government of national unity, it said.

It called on the government "to cease with immediate effect their ongoing military attempts to hunt down and kill (Machar) in their vain hope of installing Taban Deng Gai as the first vice president".

Juba was rocked by days of heavy fighting in early July between government forces and fighters loyal to Machar which erupted as he was meeting Kiir in the presidential palace.

More than 300 people were killed and tens of thousands of people fled, escalating fears of a return to civil war in the world&39;s youngest nation.

Kiir had appealed on Thursday for Machar to return to Juba and work towards rebuilding peace, pledging to guarantee his safety.

Taban Deng Gai has backed Kiir&39;s refusal to accept a boost to the mandate of the UN peacekeeping force known as UNMISS, contradicting the position of Machar&39;s group which says the UN role is vital.

"This is because South Sudan has no national armed forces, no national security agency. The existing armies are all partisan and ethnic in character," the statement said.

The latest violence in the capital echoed the fighting that first triggered the civil war in December 201 and marks a fresh blow to a deal reached last year to end the bitter conflict which began when Kiir accused Machar of plotting a coup.