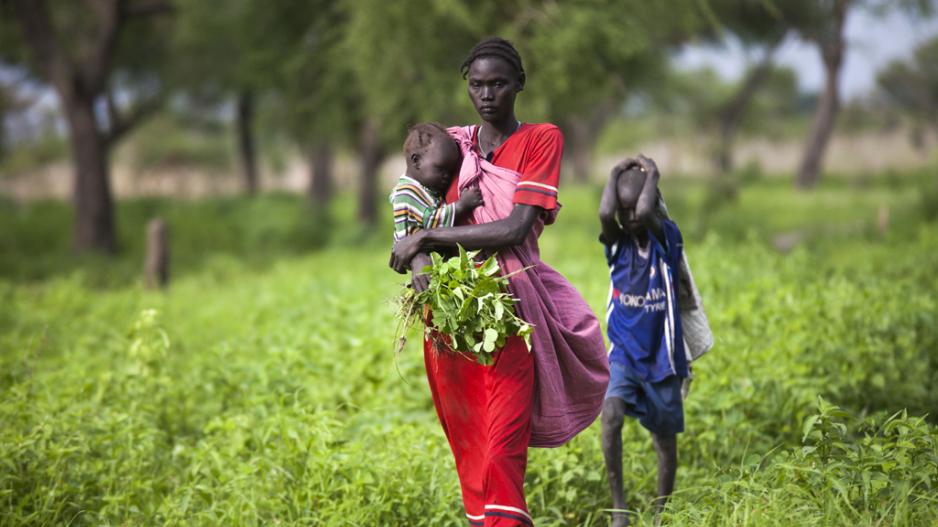 A woman, walking with her two children, collects leaves to eat on 4 July 2017, in an area where hundreds of displaced people live in Padding, Jonglei, South Sudan.

JUBA - South Sudan on Sunday marked its sixth independence anniversary in muted fashion, with no official celebration as the world's newest nation reels from a brutal and destructive ongoing civil war.

A third of the population has been forced from their homes creating one of the world's worst refugee crises, tens of thousands have been killed and a famine and food shortages have threatened the lives of millions more.

"Today I have nothing to celebrate," said 34-year-old father of three Ariik Majok, who works as a night watchman in the capital.

On 9 July 2011, dignitaries from around the world joined crowds of South Sudanese to celebrate the country's independence from Sudan to the north, after decades of civil war.

But two years later, in December 2013, a new conflict was sparked when President Salva Kiir accused his former deputy, Riek Machar, of plotting a coup.

The war since then has been characterised by ethnic fighting, sexual violence and extreme brutality with civilians the primary victims.

Last month, the government announced it was cancelling official independence celebrations for the second year running. "Our situation does not require us to celebrate," said spokesman Michael Makuei.

On Sunday morning in Juba there were no celebratory posters or banners, rather an air of mourning for the lost promise of independence pervaded the quiet streets.

'No peace, no stability'

"I don't regret voting for the independence of South Sudan," said Majok, "although I am not happy with the way things are going on in South Sudan.

"I did not expect this," he said of the war, spiralling inflation and food crisis.

Wani John, a 39-year-old civil servant, said he too saw nothing to celebrate.

"There is no peace and stability. People are dying and our leaders are not solving the situation. I am not a happy citizen," he said. "What we simply want is peace."

The laments of residents in Juba were echoed by international aid agencies which are struggling to address South Sudan's multiple crises and to raise funds for emergency relief work.

"Millions of children in South Sudan are suffering unthinkable hardships and setbacks in their education, nutrition, health and their rights," said Mahimbo Mdoe, South Sudan representative for the UN children's agency, UNICEF.

An estimated two million children have been uprooted during more than three-and-a-half years of war and at least 2,500 have been killed, UNICEF said.

The Norwegian Refugee Council (NRC)charity said there was little to celebrate as South Sudan marked its sixth independence anniversary.

"While independence brought hopes of peace and development... today's ongoing conflict has resulted in four million South Sudanese having to flee their homes.

"With more people facing a severe food crisis every month, there is unfortunately little reason to celebrate," she said.