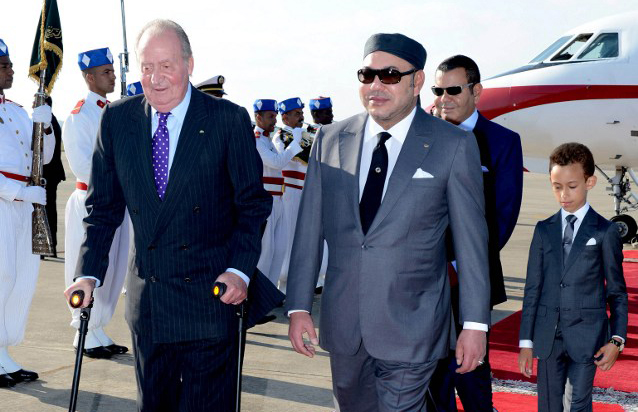 RABAT - Spain&39;s King Juan Carlos arrived in Morocco on Monday at the start of a three-day state visit, accompanied by a large delegation of cabinet ministers and businessmen.

The visit, at the invitation of King Mohammed VI, is the first by Juan Carlos outside Spain since he had back surgery in March, and is expected to reflect the close diplomatic ties between Rabat and Madrid.

The two monarchs are due to meet at a banquet dinner on Tuesday.

Also on Tuesday, businessmen from Spain and Morocco will meet to discuss ways of bolstering cooperation between the two countries.

Juan Carlos brought with him to Morocco top business executives, as well as the ministers of foreign affairs, the interior, justice, industry and development.

Foreign Minister Jose Manuel Garcia-Margallo said last week in Madrid the visit was "very symbolic on the political front in light of current developments" in the region and would also focus on economic issues.

The severe crisis that has hit the Spanish economy has seen a noticeable rise in the flow of Spaniards heading to Morocco to live or search for work, experts say.

Official figures show that 2,660 Spaniards registered for social security in Morocco last year, but the numbers actually living and working in the country are believed to be much higher.