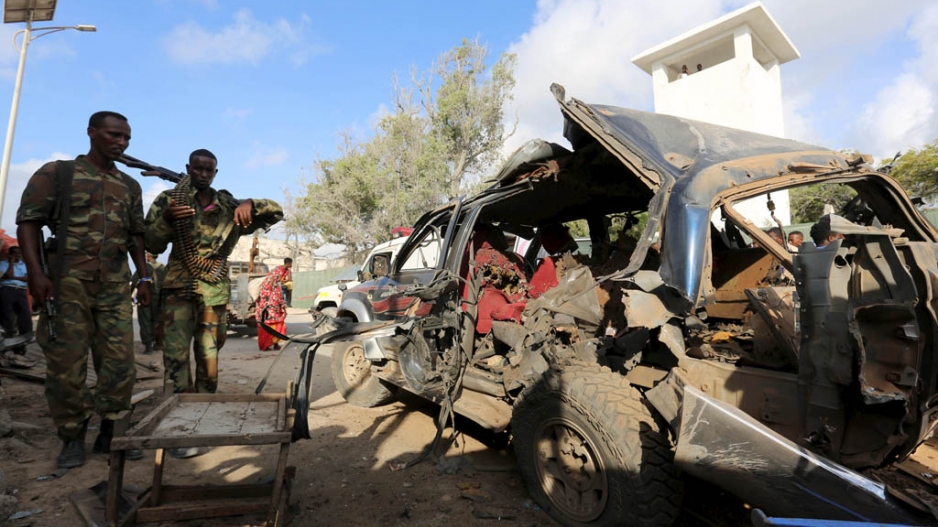 Somali policemen look at the wreckage of a car at the scene of an explosion following an attack in Somalia's capital Mogadishu, 9 March, 2016.

The overnight raid, reportedly by foreign troops, targeted the al-Shabaab-controlled town of Awdhegele, some 50 kilometres west of Somalia&39;s capital Mogadishu.

Al-Shabaab confirmed the raid but said they fought the troops off.

Meanwhile, Reuters reports that al-Shabaab set off a vehicle packed with explosives next to a cafe near a police building in Mogadishu on Wednesday, killing at least three police officers.

Somali policemen gather near the wreckage of a car at the scene of an explosion following an attack in Somalia&39;s capital Mogadishu, 9 March, 2016. Credit: REUTERS/Feisal Omar

A spokesman for the group told Reuters that 10 police officers were killed, a figure that was higher than the three deaths police reported.

Al-Shabaab often cites a higher death toll than the figure given by officials.

"Three police officers died in this car bomb," Ali Mohamed Hirsi, the commander of Mogadishu police, told reporters at the scene, where blood was visible near the tea shop frequented by officers. "The police officers were among police being trained."

Police said a second device went off, but caused no casualties after police spotted it beforehand and caught two men in the small, three-wheeled vehicle.

In the past two weeks, al-Shabaab has launched mortar bomb attacks near the presidential palace, blown up a car bomb near a busy park in Mogadishu, and set off twin blasts in a town northwest of the capital. Dozens of people have been killed.

U.S. air strikes targeted an al Shabaab facility on Saturday and U.S. officials said more than 150 fighters were killed. Al Shabaab confirmed an attack on an area they controlled but said the U.S. casualty figure was exaggerated without giving their own number.