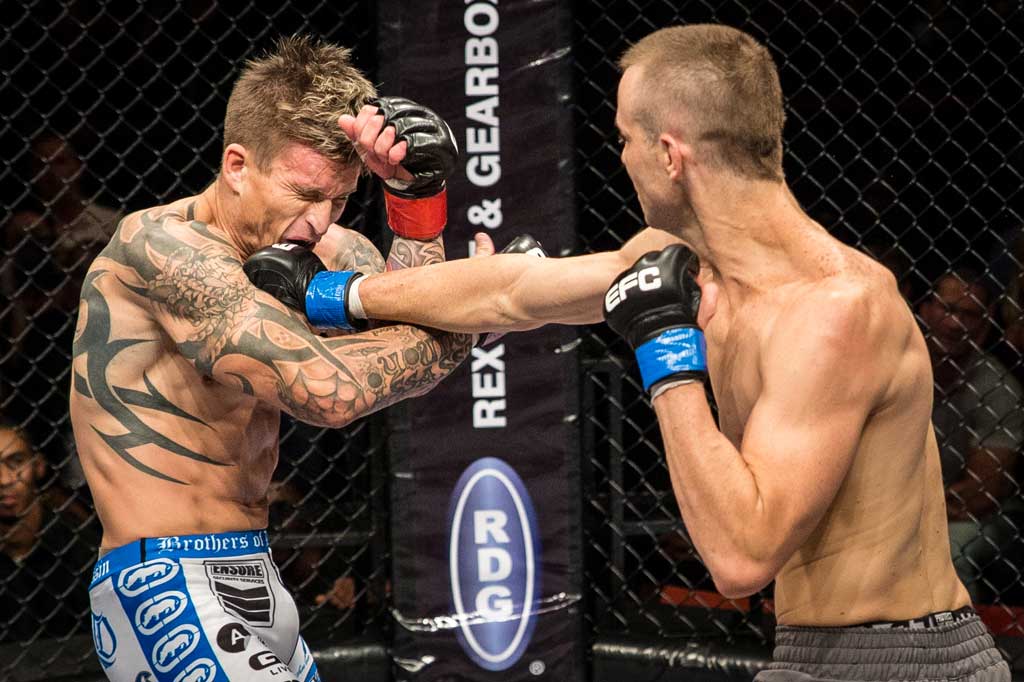 Wesley Hawkey and Boyd Allen during EFC 38 at the Durban ICC on 4 April 2015.

DURBAN - Take a look at the above picture of Boyd Allen’s imperious victory over hometown challenger Wesley Hawkey. What do you see? The left hand in guard backing-up the straight right perhaps. Or the torque generated from the hips measured by the pain in Hawkey’s face. Even the mess of a defence being offered by the Durbanite who despatched notables such as Gareth Buirski, Hanru Botha and Brendon Katz on his pathway to Allen’s waist wear.
I see context, the culmination of a variety of factors that resulted in that freeze-frame in a specific time and place. I see attitude, training, footwork, head movement and approach angles. Such simple and flawless technique speaks a thousand words, which is just as well because the featherweight champ is a man of few words. Sometimes he comes across as simple, other times too chilled to bother but perhaps a mixture of the two - Boyd Allen is economical with his language. But his ruthless despatching of Hawkey at the ICC on Saturday was perhaps the most eloquent and fluent display of combat in the history of EFC.
His Fight Fit Militia stable mates Igeu Kabesa and Martin van Staden, who graced the Hexagon before him with first-round knockout victories, also put to bed the lay-and-pray clich often levelled at the Sunninghill mob. For all the dominant grappling of Wessels and Pena, it has to be said that FFM is lately putting on a stand-up master class for the organisation.
Another fighter who insures his fists with superb groundwork is the aforementioned Hanru Botha. MMA in South Africa is an ever-evolving beast and well-rounded multi-disciplinarians like the Polokwane native continue to do well. His opponent, the young and talented Tyson Chelin simply didn’t have the strength to deal with Botha on the mat and subsequently got pummelled for three whole rounds. Botha took the UD from the judges and has to be in line for a rematch with Allen.
EFC 38 delivered a quality show again at the seaside, especially with seven fights not making it to the first bell. Fight of the Night was awarded to featherweights Sizwe Mnikathi and Ashley Calvert for a cracking little war. Knockout of the Night went to the power-rushing Amanda Lino for her K.O of Stephanie Quaile. Submission of the Night went to Cameron Meintjes for his submission of Georgie Gorgiev and performance bonuses were handed out to Peter Nyide and Nelson Feiteira, though I really thought Igeu Kabesa’s gorgeous overhand left deserved quite a few more Mandelas.
As a footnote, it was a case of revolving doors in transatlantic MMA as Ruan Potts re-signed with EFC in the same week that Garreth McLellan debuted in the UFC Octagon. One hopes that ‘Soldierboy’ has more success with the global industry leader than ‘Fangzz’, who got released from his contract by Vegas after three back-to-back losses. McLellan is fighting at Fight Night 64 on Saturday night in Krakw, Poland on a card headlined by Mirko Cro Cop and Gabe Gonzaga. His opponent fighting with the benefit of a home crowd is Bartosz Fabinski (11 - 2 – 0) whose record is an almost carbon-copy of McLellan (12 - 2 – 0). I’m picking Garreth to take the win by RNC three minutes into round two and I’d like to think everyone reading this column wants him to show the world that South African MMA is a growing force to be reckoned with.
EFC Worldwide returns to the mother city for its 39th incarnation on the 7th of May at Grandwest Casino in Goodwood with what is shaping-up to be a mouth-watering main card of Dan Madge vs Fred Naumann, Gideon Drotskie vs Tumelo Maphuta and the heavyweight belt is on the line with incumbent Brendon Groenewald defending his golden strap against Andrew ‘One Gear’ Van Zyl.