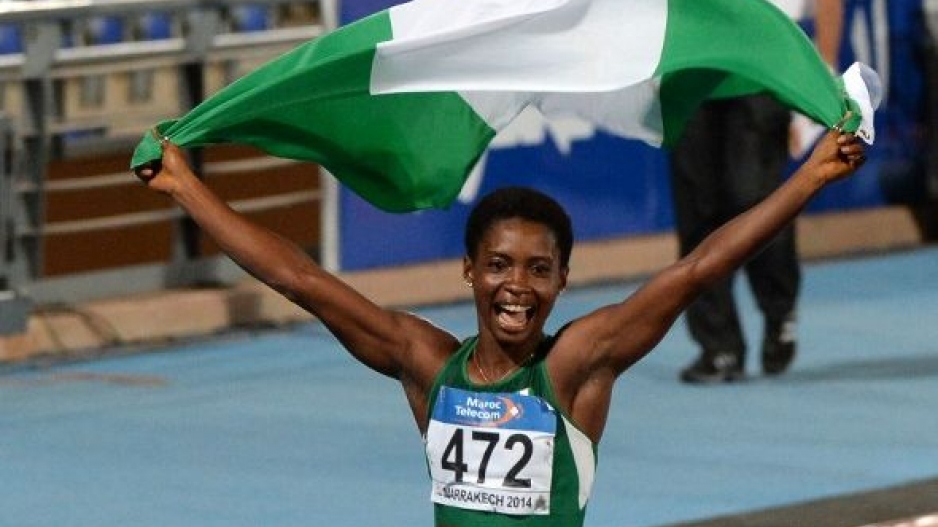 Nigeria's Chinazom Amadi celebrates after winning the Women's long jump at the 19th senior African championships in athletics on August 12, 2014 in Marrakesh.

JOHANNESBURG – Eight Nigerian athletes including four gold medallists from last year’s All-Africa Games, have been banned by the World Anti-Doping Agency (WADA) after testing positive for illegal substances, according to the country’s Sports Minister Solomon Dalung.

Chinazom Amadi, winner of the women’s long jump gold medal at the All-Africa Games in Brazzaville, has been revealed to have failed a test after anabolic steroid methenolone was found to be in her system during the competition.

The winner of the men’s long jump Samson Idiata, meanwhile, was found to have taken the steroid clenbuterol, with both athletes banned for four years.

Another Nigerian gold medallist at the All-Africa Games, weightlifter Elizabeth Onuah, has been given an eight-year suspension after the banned diuretic amiloride was discovered.

It was the under-53 kilogram competitor’s second offence, as she was previously banned from March 2010 to 2012 after testing positive for hydrochlorothiazide and amiloride.

The pair, who both tested positive for a banned diuretic, have been handed four-year suspensions.

The medal winners from Brazzaville now face being stripped of their prizes.

Nigeria had finished the Games second overall on the medals table with 47 gold, 55 silver and 42 bronze medals, behind Egypt, although that number now looks set to be reduced.

Sprinter Deborah Odeyemi, who did not compete in Brazzaville but was a member of the Nigerian team at the 2015 International Association of Athletics Federations World Championships in Beijing, has also provided a positive sample for methenolone.

She failed her test at the All-Nigeria Championship and has also been handed a four-year sanction.

Para discus thrower Sunday Ezeh has been banned for four years for an illegal diuretic while Para-lifter Thomas Kure has received the same penalty after also failing a test.

“It is true that some Nigerian athletes tested positive to banned substances at the last All Africa Games,” Dalung said following a meeting with the Nigerian National Olympic Committee (NOC).

“About five medals have been indicted because of the development and that takes us to why we are meeting here with the NOC.

“We still want to intensify our advocacy on anti-doping, the issue of doping is not always as we say it.

“Sometimes it could be from the food the athlete has taken or some drugs they took without knowing the implications before the event, so what we are planning to do is to improve on our advocacy on anti-doping.”