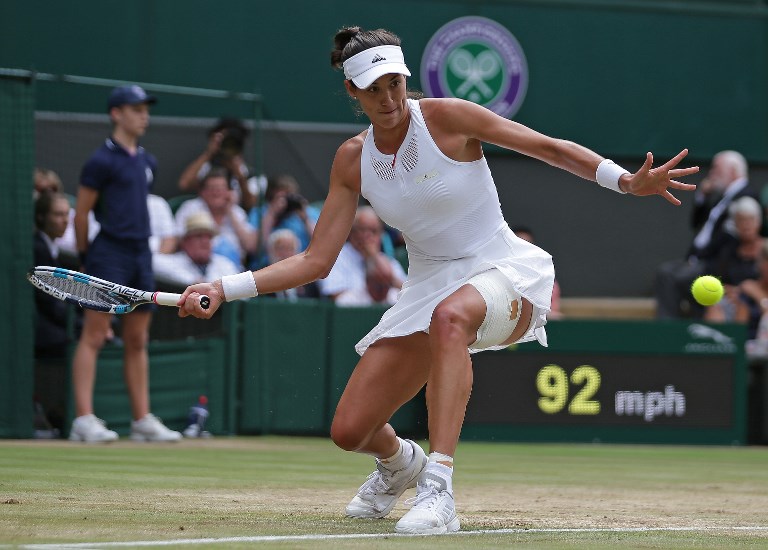 Spain's Garbine Muguruza returns against Slovakia Magdalena Rybarikova during their women's singles semi-final match on the tenth day of the 2017 Wimbledon Championships at The All England Lawn Tennis Club in Wimbledon, southwest London, on July 13, 2017.

NEW YORK - Reigning Wimbledon champion Garbine Muguruza was excited to reach the second round Monday at the US Open while former world number one Maria Sharapova was poised to swipe the Broadway spotlight.

"Very happy I'm in the second round," said Muguruza. "I've been here so many times and I've never done very well. I will try again and hopefully it will happen."

The 23-year-old Spaniard improved to 17-2 since the start of her London Grand Slam title run, a stretch that also included a crown at Cincinnati in the last major US Open tuneup.

Muguruza, who won last year's French Open and reached this year's Australian Open quarter-finals for the first time, can reach the New York third round for the first time Wednesday by defeating either US qualifier Claire Liu or China's Duan Ying-Ying.

After dominating the first set, Muguruza fought through most of the second before breaking 64th-ranked Lepchenko at love in the penultimate game.

"She started a little bit nervous and I started very well. Then the match equaled and I had a big fight," Muguruza said. "I give everything I have on the court. I sweat and work hard on every point."

"I don't think any tennis fan in the world is not going to have that match on," said US 15th seed Madison Keys. "We all knew it was inevitable she would be back in majors and playing. I'm sure this first round is going to be interesting."

Five-time Grand Slam champion Sharapova, whose major titles include the 2006 US Open, tested positive for the banned blood boosting drug meldonium at the 2016 Australian Open.

Her comeback began with an April semi-final run at Stuttgart but many rivals complained about wildcard entries she received to assist her fight back to top form.

"When someone has been banned or out of competition, I think you have to work for it a little bit to go and play your tournaments and not help that much sometimes," Muguruza said Saturday.

The French Open denied Sharapova a wildcard and she missed Wimbledon with a thigh injury, but US Open officials offered her a wildcard as "a past US champion who needed the wildcard for entry into the main draw," according to a tournament statement.

Sharapova, ranked 146th, played only one hardcourt tuneup match before a forearm injury sidelined her.

'A big challenge' for Halep

Sharapova is 6-0 lifetime against Halep, although she last played the 25-year-old Romanian in the 2015 WTA Finals. Sharapova is 10-0 in US Open first-round matches and has won 22 consecutive Grand Slam openers since the 2010 Australian Open.

"It's going to be a big challenge, first round of a Grand Slam, to face her," Halep said. "I feel better and I feel that I'm ready to face her again. I just want to change something. Maybe I can win."

Halep enters the Open after her third loss in as many months with a chance to claim the world number one ranking, falling in the French Open final and Wimbledon semi-finals, each time after winning the first set, and to Muguruza in the Cincinnati final.