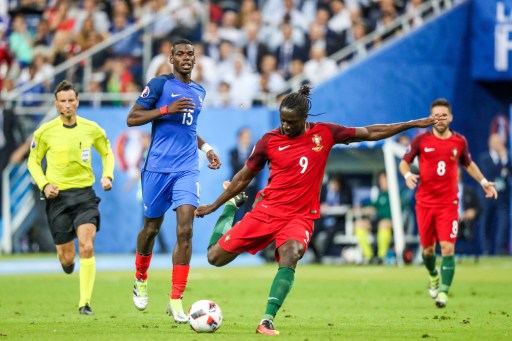 Portugal's forward Eder shoots to score the team's winning goal during the Euro 2016 final football match between France and Portugal at the Stade de France in Saint-Denis, north of Paris, on July 10, 2016.

PARIS - Portugal found an unlikely hero as Eder&39;s thunderous finish deep into extra time secured their first European Championship title after they overcame the early loss of Cristiano Ronaldo to snatch a 1-0 victory over hosts France on Sunday.

The substitute picked the perfect time to score his first competitive goal for his country, marauding forward before letting fly with a bullet shot from 25 metres in the 109th minute.

It was a magic moment for the 28-year-old, who plays for French club Lille after a largely unglamorous career, and a cruel blow for France and their coach Didier Deschamps.

His side had dominated the match, but squandered a number of chances, in front of their devastated home support, who arrived at the Stade de France hoping to celebrate a third European crown.

The trophy was lifted triumphantly by Portugal captain Ronaldo, who broke down in tears at the final whistle after his own game had come to a frustrating end after 24 minutes when he was carried off the pitch on a stretcher with a knee injury.

The script had been written for him to produce a performance to match his status as one of the game&39;s greats, but he had to settle for a back-stage role after Dimitri Payet&39;s challenge left him in a heap on the floor.

So much of the build-up had focused on Ronaldo and his hopes of crowning a glittering career with the only achievement missing from his CV, a piece of international silverware.

That was achieved, but, with Eder stealing the limelight and his own role reduced to that of a cajoling cheerleader, it was probably not how Ronaldo would have envisaged his evening panning out.

Yet having been part of the Portugal side that were stunned in the final as hosts by Greece in 2004, he celebrated wildly with his team mates as ticker tape rained down from the rafters.

"This is one of the happiest moments in my career," he said. "I&39;ve always said I wanted to win a trophy with the national team and make history. And I did it. Thank God, things went well for us."

Coach Fernando Santos, whose side had won only one match inside 90 minutes out of seven at the tournament, hailed a perfectly executed tactical display.

"We were as simple as doves and as wise as serpents," he said.

"Wherever we&39;ve gone there have always been Portuguese fans. This lifted our souls. It&39;s hard to describe the players&39; emotions -- it&39;s incredible."

For France it was a debilitating defeat after they had come into the match as heavy favourites and hoping to lift the spirits of a nation still recovering from last November&39;s attacks in Paris.

"We missed a chance, maybe not a unique chance, but a great chance to become European champions," Deschamps said.

"Our disappointment is immense and will take time to digest. We won together, we suffered together and we lost together. It would have been magnificent to offer this trophy to our supporters, here at home."

For the much of the match, there had looked like being only one winner as France began with early attacking intent, fuelled by the bullish presence and charging runs of Moussa Sissoko in midfield.

His 34th-minute shot was well-parried by Portugal keeper Rui Patricio, but by that point the match had settled into a pattern of France probing and pushing but struggling to break down their more defensively-minded opponents.

Tears and sympathy turn to triumph for Ronaldo in Euro2016Final with Portugal win over France
https://t.co/oGwU48eHbO

Without Ronaldo, Portugal seemed in no hurry to rush the ball forward, happy to see the game descend into a cagey, tactical battle.

They had a scare, however, in the 67th minute when Kingsley Coman&39;s cross found Antoine Griezmann unmarked six metres from goal, only for the tournament&39;s top scorer to head a golden opportunity over.

Minutes later, Olivier Giroud, fed by sprightly substitute Coman, forced a diving save from Patricio, who then parried away a pile-driver from Sissoko as France turned the screw.

France&39;s best chance of the night arrived in stoppage time when substitute Andre-Pierre Gignac turned his marker inside out before scuffing a shot past the keeper and against the post, with the ball bouncing across the face of goal and then out of harm&39;s way.

While Portugal continued to sit back in extra time, they had the better chances with Eder&39;s header parried by Hugo Lloris and Raphael Guerreiro striking the crossbar with a free kick before Eder&39;s moment of magic.