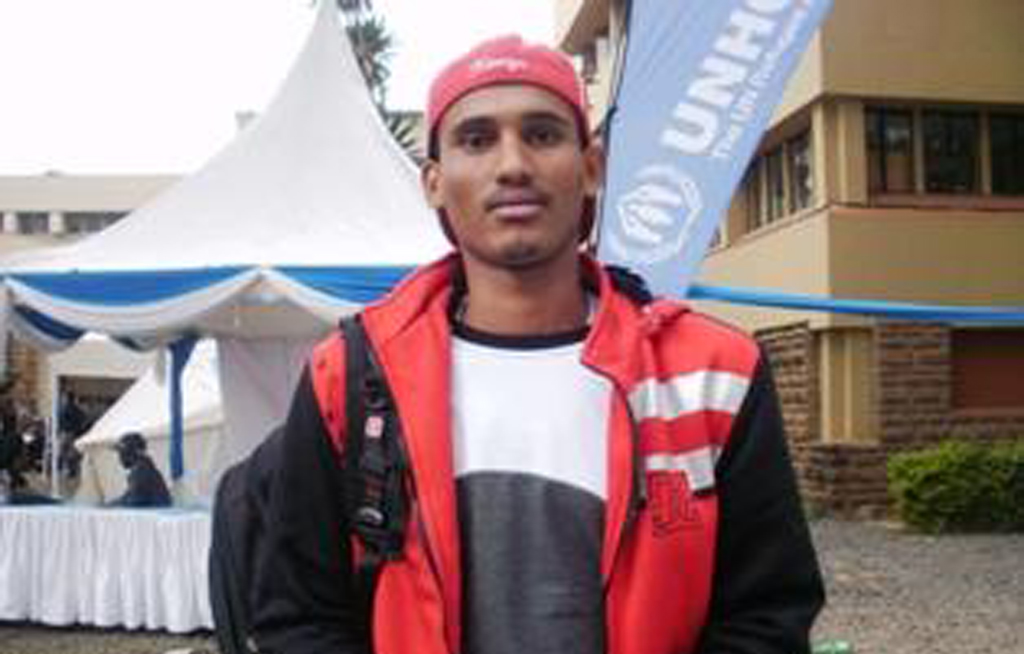 Omar Osman, a Somali refugee who says he is Kenyan by birth and socialisation. He has never been to Somalia. However, the Kenya government recognises him as a Somali.

NAIROBI  – As the United Nations begins the verification  of refugees in Dadaab refugee camp, a group of stateless refugees is worried about their own fate.

This week, the United Nations announced that it had begun a verification exercise of refugees living in Kenya as a first step towards the repatriation of Somali refugees by November as demanded by the government of Kenya.

The UN said that the "verification exercise" was necessary to determine how many residents of the Dadaab complex were citizens of Kenya posing as Somali refugees. The UN said locals posed as refugees in order to benefit from handouts.

The announcement was met with resistance by refugees, human rights groups and even some donor countries – many of which have harsh restrictions on allowing asylum seekers in their own countries, observed the Kenyan official.

The Banyamulenge refugees, living mostly in various towns in Kenya, are an unsettled lot. They are anxious because they have no country they can call home. They say they are rejected by and ejected from every country they go to, except Kenya.

The group claims they feel safe only in Kenya and, even then, only in the urban areas where they claim to be safer than in the refugee camps. They say they are targets for murder and violent attacks when in the camps as other Eastern Africa refugees curiously reject them.

Four Banyamulenge community leaders spoke exclusively to the African News Agency (ANA), revealing the untold, intricate story of their plight. For fear of repercussions, only one community leader allowed ANA to take a photo of him, the other three declined, fearing the consequences media exposure could bring.

Clement Birori is a Banyamulenge refugee community leader in charge of the Kasarani area in Nairobi. Clement came to Kenya in 2013 after fleeing his war-torn country Congo. Clement said the majority of Banyamulenge live quiet lives in low-class housing estates in urban areas.

"We should not be treated the same way as other refugees since we have no home to return to," said Clement as his compatriots nodded.

"But where did you come from before seeking asylum in Kenya. Did you not come from Congo?" asked this ANA reporter, puzzled at the claim of statelessness.

"We came from Congo yes, but the Congolese say we are not Congolese. They claim we are originally from Rwanda and should return there. The Rwandese and Burundians say we are not from their countries, so we are stateless."

Clement said he and fellow Banyamulenge were issued "alien cards" by the Kenya government and were allowed to live in urban areas. His children attend government public schools while he and his wife engage in small-scale trading for sustenance.

His compatriot, Aimable Byiza, says they are pained by the government’s announcement that all refugees are to return to the refugee camps and echoed Clement’s question: "Where do we return to? Some of us did not come from any of the camps. And we cannot go because the Congolese and Burundians in those camps will kill us, just as they did in the camps in Burundi in 2004.”

"Also in Rwanda we were targeted and attacked in 1997 when we escaped from Congo to camp there. So where do we go now?" asked Clement, adding that Kenya was now home to the Banyamulenge children born here.

Jeanne Munangaraza is in her thirties. She has lived in Kenya for three years after escaping from South Kivu, a war hotspot in Congo. She says she came to Kenya with her husband and six children. She is also a community leader of her people in Kasarani. She represents the women’s voice among her people.

She speaks highly of her host country Kenya, saying the government gave them "alien cards" for identification as refugees, while the UNHCR gave them letters of asylum recognition.

"The government’s alien card enables me and my family to access many benefits, including the National Hospital Insurance card which helps us when we seek treatment from government hospitals," said Munangaraza.

She suddenly breaks down in tears, recalling that in 2014, without warning, the government decided to round up all refugees in Kasarani and took them to Dadaab refugee camp.

"I knew I had to escape because I was not safe as a Banyamulenge in a refugee camp which had other east Africans, especially the Congolese, who really hate us," she said, while wiping her tears.

"I was determined to get back to my children in Nairobi. I stayed for three months in Dadaab then managed to escape with others. At the roadblocks we bribed the Kenyan security all the way to Nairobi," said Jeanne, whose statement was a confirmation that security lapses are largely to blame for the frequent terrorist attacks in Kenyans.

She said that soon after her return, the Banyamulenge went to court to seek for a "movement pass" which allows them to move around the country freely. The court granted their request and they have been living peacefully among Kenyans.

"I am a hawker. I sell vitenges (African print fabric) and the majority of my clients are Kenyans," said Munangaraza, adding that taking them (Banyamulenge) back to Congo was as good as killing them.

"In Congo, we are like hunted animals, we cannot go back there or to any other East African country," she said, adding that if Kenya did not want them they should be given a third country for resettlement, preferably a Western country like Canada.

Justin Rupiya is a Banyamulenge refugee community leader in charge of Kayole, a low-class residential area in Nairobi. He has been in Kenya for one and a half years, together with his wife and six children. He has never lived in a refugee camp in Kenya.

He too has only positive remarks about his host country, saying his children are allowed to attend public schools while the alien card given them by the Kenya government allows them to seek treatment in government hospitals.

"I have never lived in a refugee camp, neither have my children. And I can tell you this, I will not go to any camp. Let your government and UNHCR resettle us in a third country. You cannot take a human being back to be slaughtered. It is inhuman," he said.

He said that of late, Kenyan neighbours had been treating them with suspicion following the government’s recent announcement that all refugees must leave Kenya by November.

Other Banyamulenge refugees have settled in Nairobi’s satellite towns such as Rongai, Kitengela, Umoja and Githurai.

According to UNHCR, the UN agency dealing with refugees, although Kenya is not a signatory party to the 1954 Convention relating to the Status of Stateless Persons or the 1961 Convention on the Reduction of Statelessness, it had recently renewed its national legislation, which now includes a definition of statelessness and allows for better recognition of persons with undetermined nationality.

Additionally, in 2010, Kenya promulgated a new constitution which contains a revised chapter on citizenship.

The UNHCR says that in 2011, the Government of Kenya enacted the Citizenship and Immigration Act, which provides an opportunity for stateless persons to be registered as citizens of Kenya.

"Implementation of the renewed national legislation has been slow. The Government has not articulated a comprehensive strategy to address the needs for persons with undetermined nationality," said the UNHCR.

The UNHCR said that stateless persons continued to face a variety of protection risks, particularly with regard to inadequate documentation, adding that they estimated that about 20,000 people in Kenya did not have a "determined nationality".