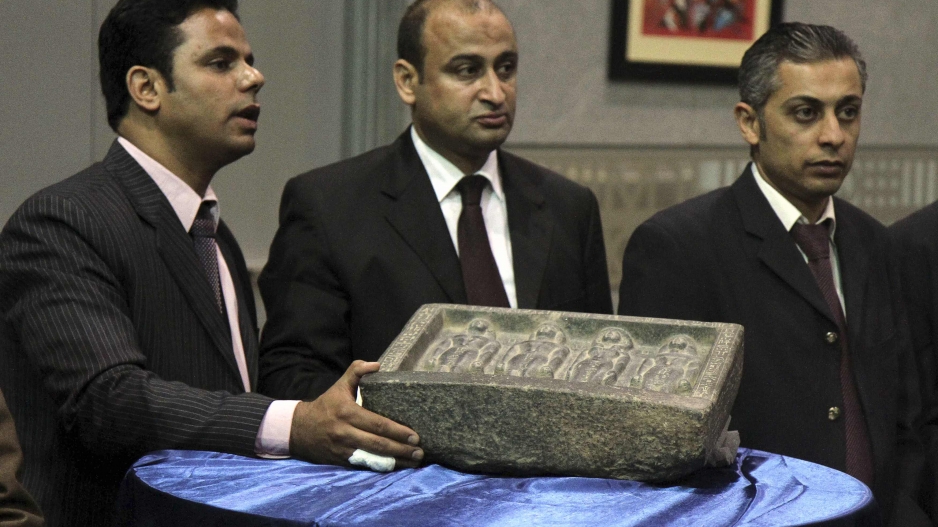 An Egyptian archaeologist shows one of the three ancient artefacts recovered from Germany during a news conference at Cairo airport, May 3, 2014. Egypt's antiquities ministry celebrated the return of three stolen ancient artefacts smuggled into Germany.

CAIRO - Egyptian antiquities authorities held a ceremony at Cairo International Airport this weekend to mark the repatriation of three stolen ancient artefacts seized in Germany in 2009.

It is thought the artefacts were en route to being sold in Belgium, when German customs officials discovered them hidden in a truck.

Egypt has found it hard to prevent the pilfering of tombs and the smuggling of priceless artefacts out of Egypt.

An intensive campaign has already seen the return of 1,400 artefacts stolen since the 2011 uprising.

Mohamed Ibrahim, Egypt&39;s Antiquities Minister said: "To repatriate these objects I think is just to say to everybody around the world that we are keen to get back every piece that were stolen from Egypt illegally.

"So we are working on it and we will not stop working on getting back all of our monuments."

Ibrahim says the US is the largest market for stolen Egyptian goods, but says his country is working closely with Washington.

The US Congress will soon pass a bill that would put in place emergency measures to stop the trade.