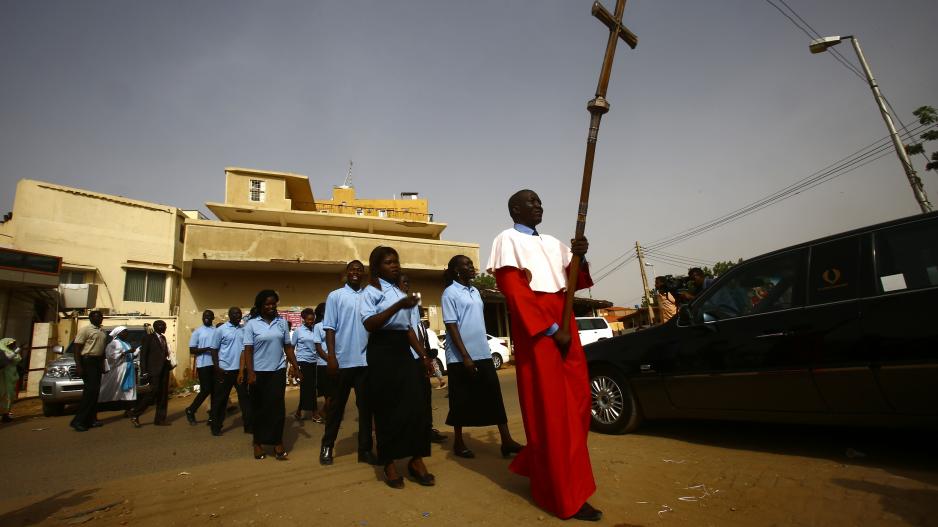 Sudanese Christians take part in a ceremony led by the Archbishop of Canterbury at Khartoum's All Saints Cathedral.

KHARTOUM - Archbishop of Canterbury Justin Welby on Sunday declared Sudan the 39th province of the worldwide Anglican Communion, six years after the predominantly Christian south gained independence from the north.

The Anglican church in Sudan, a majority Muslim country, has been administered from South Sudan since the 2011 split which followed a civil war that left more than two million people dead.

Welby said that creating a 39th Anglican province with its own Khartoum-based archbishop was a "new beginning" for Christians in Sudan.

He installed Ezekiel Kondo Kumir Kuku as the country's first archbishop and primate at a ceremony in the capital's All Saints Cathedral attended by American, European and African diplomats and hundreds of worshippers.

"We welcome the new primate with jubilation," Welby announced to a cheering crowd as he handed a cross to Kuku.

Welby, spiritual head of the Church of England and of the global Anglican Communion, said it was a rare opportunity for an archbishop to declare a new primate.

"It is a responsibility for Christians to make this province work, and for those outside (Sudan) to support, to pray and to love this province," he said.

"The church must learn to be sustainable financially, to develop the skills of its people, and to bless this country as the Christians here already do."

The idea of a separate Anglican province in Sudan was first discussed in 2009 as it became clear that the south would secede.

"But after the split it was decided to have a separate, autonomous Episcopal Church of Sudan," he said.

"Today, we inaugurated that. It will have its own autonomous administration to take its own decisions."

There is no central Anglican authority such as a pope, with each member church making its own decision in its own ways guided by the Archbishop of Canterbury.

Human rights and Christian campaign groups have regularly accused the Sudanese authorities of persecuting Christians and even destroying churches in the capital since the north-south split.

About three years ago two South Sudanese pastors, Yat Michael and Peter Yen, were arrested in Sudan on charges including spying and crimes against the state.

The two, arrested by agents of Sudan's powerful National Intelligence and Security Service (NISS), were released by a Khartoum court in August last year.

Since the 1989 coup that brought Islamist backed President Omar al-Bashir to power, authorities in Khartoum have pursued Arabising and Islamising policies in a bid to unify the country.

This has stirred resentment and helped trigger a devastating civil war that ended with the secession of the mainly Christian south.

Christian communities in Sudan today are mostly found in the Nuba mountains of South Kordofan state. Experts say that between three and five percent of Sudan's about 25 million population are Christian.

US President Donald Trump is to decide on October 12 whether to permanently lift sanctions imposed in 1997 over Khartoum's alleged backing for Islamist militant groups.

Several campaign groups have urged Washington to maintain the sanctions or formulate new ones to address concerns over human rights violations, including alleged religious repression.