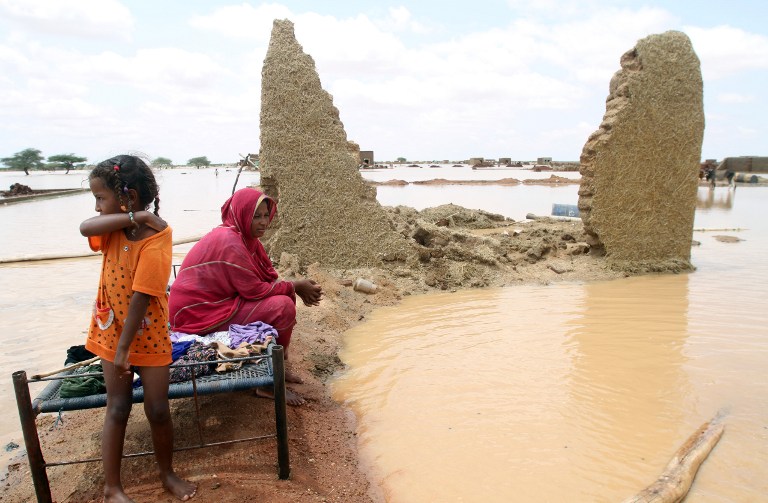 A Sudanese women sits next to her house in a flooded street on the outskirts of the capital Khartoum on August 10, 2013

KHARTOUM –Sudanese authorities on Wednesday warned people living near the banks of the Nile to be wary of flooding, after two weeks of heavy rainfall killed dozens across the country.

Authorities said water levels were rising on the Blue Nile along border with Ethiopia after continuous rainfall in that country.

The Blue Nile flows to Khartoum where it meets the White Nile and they become the Nile, which flows into Egypt.

"The Blue Nile is rising because of continuous heavy rainfall in Ethiopia," Mohameddin Abu al-Qasim of the interior ministry told AFP.

"We warn residents living on both sides of the Nile to be cautious."

At least 76 people have been killed due to flooding elsewhere in Sudan, Interior Minister Ismat Abdul-Rahman said last week.

The United Nations aid agencies had warned of flooding in Sudan between July and November this year.

The most affected states are Kassala, Sennar, South Kordofan, West Kordofan and North Darfur, said the United Nations Office for the Coordination of Humanitarian Affairs, or OCHA.

"Heavy rain and flooding since early June have affected over 122,000 people and destroyed over 13,000 houses in many parts of Sudan," it said in a statement released on Wednesday.

A downpour in August 2013 was the worst to hit Khartoum in 25 years, affecting tens of thousands of people, the UN said.

Those floods had killed about 50 people nationwide, most of them in the capital.