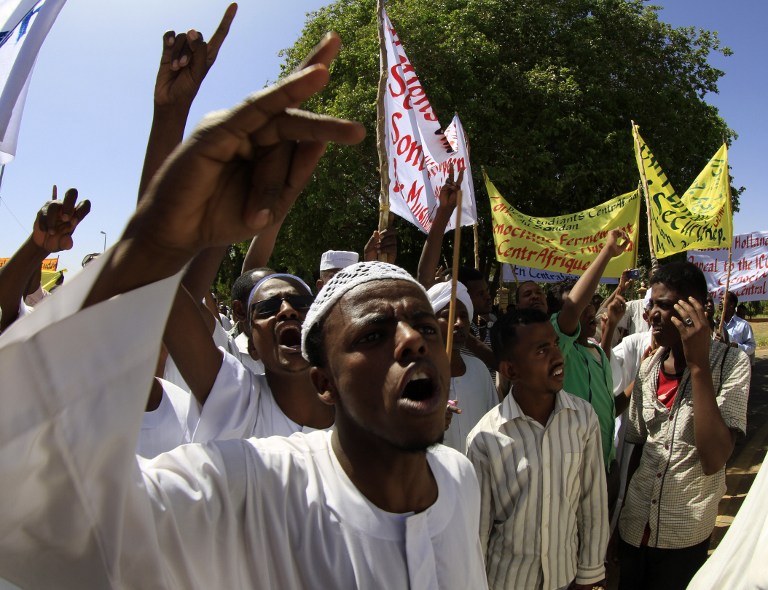 Sudanese protestors shout slogans during a demonstration to denounce France's role in the Central African Republic in Khartoum.

KHARTOUM - Sudanese police tear-gassed a demonstration by members of the political opposition on Saturday night, despite the government&39;s call for national dialogue.

About 200 representatives of opposition parties, including the small Communist and Sudanese Congress Parties, took to the streets in North Khartoum shouting for "freedom and justice", the reporter witnessed.

Police used tear gas and batons against the crowd, which scattered with some demonstrators hurling stones back at the police.

The opposition members demonstrated after meeting at Sudanese Congress Party headquarters to discuss the situation in the country ravaged by armed insurrection, poverty and political turmoil.

The group had to meet inside the party office after police shut down an outdoor gathering they tried to hold earlier Saturday.

Faced with a ravaged economy, dissension within his ruling party and urgent calls for reform from outside it, President Omar al-Bashir in January appealed for a broad national political discussion and "renaissance".

"The freedom of people has to be respected," Bashir said.

Critics say his political dialogue is just a way for the elite to hang on to power without properly addressing Sudan&39;s problems.

While some opposition parties including Popular Congress, led by the veteran Islamist Hassan Al-Turabi, have agreed to talk with Bashir, many have not.

They include the communists and Sudanese Congress, who belong to an opposition alliance which has set a number of conditions for talks.

These include annulling laws which restrict freedom, and establishing a "transitional administration" with broad national participation.