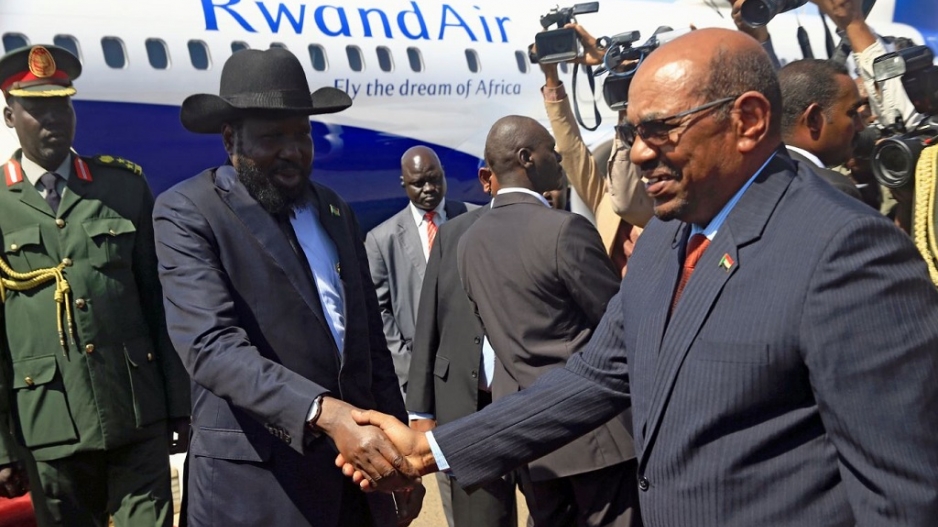 Bashir&39;s remarks came during a meeting with Kiir, starting a two-day visit to Khartoum to try to resolve border disputes and address mutual accusations of supporting rebels in each other&39;s countries.

It is Kiir&39;s third visit to Khartoum since the Christian-majority south split from the Muslim north in 2011 after a 22-year civil war that killed hundreds of thousands.

"Sudan is keen to resolve all pending issues ... and activate political and security mechanisms in order to take bilateral relations forward," Bashir told Kiir at their meeting, according to SUNA.

"Sudan is supporting South Sudanese people and has kept open its territories to deliver humanitarian aid to South Sudan, and will also step up efforts for peace in South Sudan," Bashir said.

Bashir earlier welcomed Kiir and his delegation at Khartoum airport and the two then held a joint meeting.

Due to unresolved issues, ties between Khartoum and Juba have often been tense since South Sudan gained independence six years ago.

Border rows, economic issues such as Juba&39;s payments for the use of an oil export pipeline through Sudan and building a buffer zone along the frontier are expected to dominate talks during Kiir&39;s visit.

Officials will also attempt to address tensions over alleged support for insurgents.

The status of the contested border district of Abyei also remains an unresolved issue.

"This visit (of Kiir) is aimed at normalising the relations between the two countries which have been tense," South Sudanese Information Minister Michael Makuei told reporters minutes after Kiir arrived in Khartoum, adding the two leaders would decide on a roadmap to boost trading links.

"The two countries should cooperate in the interests of their people as they are all one people in two countries."

His Sudanese counterpart Ahmed Bilal said the visit aims to "establish security and stability in the two countries".

READ: Raids on Uganda show South Sudan&39;s war is spilling across its borders

Tens of thousands of people have been killed in South Sudan and millions more have been driven from their homes since the war erupted in the world&39;s youngest country in December 2013.

More than 450,000 South Sudanese refugees have poured into Sudan since the war broke out, the United Nations says. Khartoum estimates they number 1.3 million.

Juba said it appreciates Khartoum&39;s efforts to accept the growing number of refugees.

Apart from accepting refugees, the openings of border crossings by Khartoum has also helped trading activities, Juba said in a statement issued before Kiir left for Sudan.

"South Sudan will do all it can to ensure that the Republic of Sudan interests in South Sudan are protected and promoted," it said.