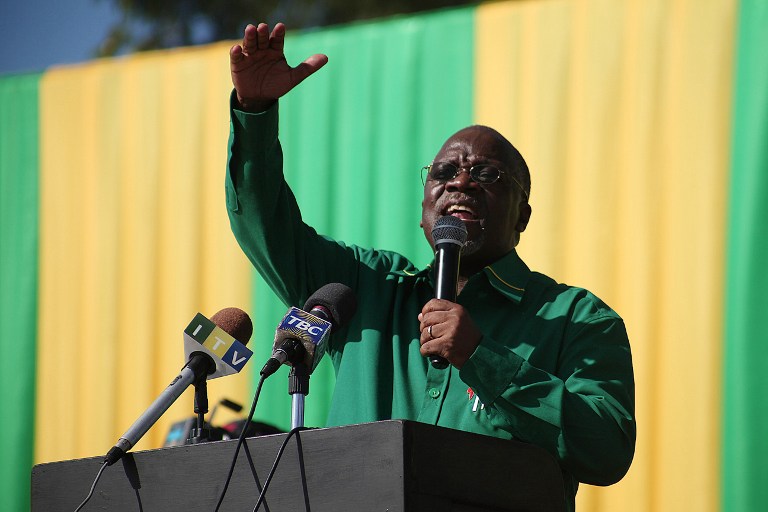 Chama Cha Mapinduzi (CCM) Presidential candidate John Magufuli delivers a speech during a political rally on 14 July, 2015 in Dar es Salaam, ahead presidential election which will be held in October 2015.

The pledge was made during political campaigning ahead of the 25 October polls, in which Chama Cha Mapinduzi (CCM) party candidate John Magufuli is hoping to succeed President Jakaya Kikwete.

"There are high-placed people, even in state institutions, who possess thousands of hectares that are just simply there, without being cultivated or used for livestock," he told a televised campaign meeting.

"I will redistribute them," he vowed.

Land rights is a contentious issue in Tanzania, where a period of privatisation in the 1980s and 1990s -- which was marked by land grabbing and corruption -- had fuelled conflict with pastoralists and indigenous groups.

The ruling CCM party has dominated politics since modern Tanzania was formed in 1964, and currently has two-thirds of seats in parliament.

Magufuli, aged 55 and currently a minister of works, has put the fight against corruption at the centre of his campaign, and has been depicted as a clean politician.

But he is facing the tightest electoral race in the east African nation&39;s history, with the main opposition parties uniting around ex-prime minister Edward Lowassa, 61, who recently defected from the CCM.

He has also pledged to root out corruption and help the country&39;s poor.

The CCM has also been weakened by internal splits and a string of graft scandals, and recently suffered defections of high-profile members -- including ex-prime minister Frederick Sumaye and former home affairs minister Lawrence Masha -- to the opposition coalition.

Tanzania, with over 50 million people, is east Africa&39;s most populous country, with economic growth of more than seven percent, according to the World Bank.

Despite advances, the country remains very poor by regional and international standards, the World Bank says, with agriculture the key sector, providing a quarter of gross domestic product and employing three-quarters of the population.