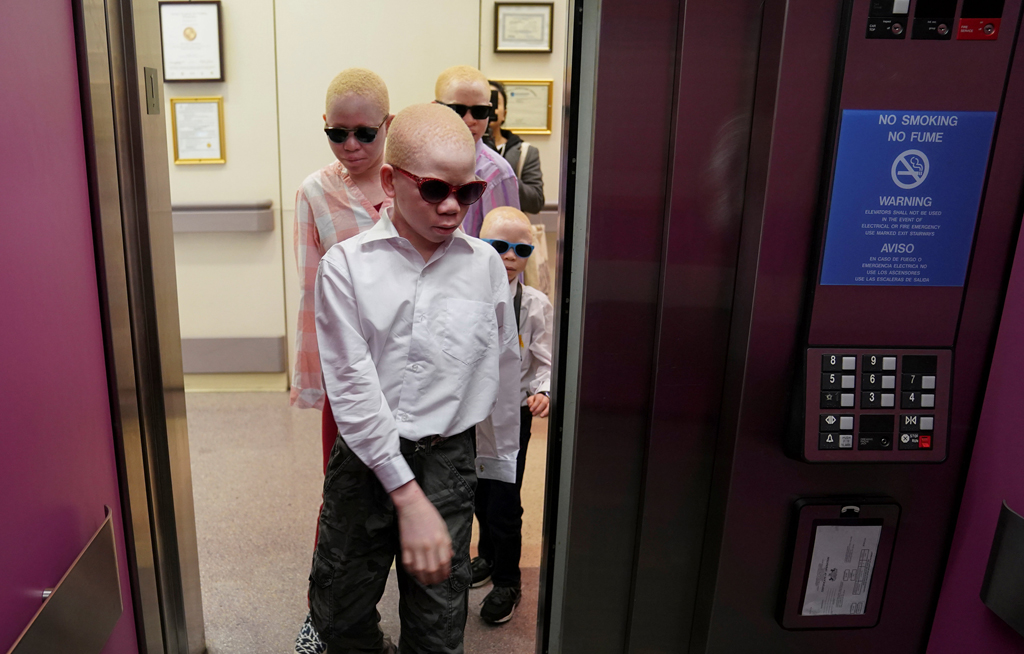 NEW YORK  - Four Tanzanian children with albinism who lost limbs, fingers, and teeth in superstition-driven attacks made their way home this week after receiving prosthetics - and a dose of confidence - in the United States.

FILE: Baraka Lusambo, 7, a Tanzanian with albinism who had an arm chopped off in a witchcraft-driven attack, puts on his prosthetic arm at the Global Medical Relief Fund house in the Staten Island borough of New York City.

The children, ages 7, 14, 15 and 16, were treated free of charge at Shriners Hospital for Children in Philadelphia.

Their travel and housing expenses were covered by the Global Medical Relief Fund, a New York-based charity that helps children who have been injured in conflicts or disasters.

FILE: Emmanuel Rutema, 15, works on a pencil drawing at the Global Medical Relief Fund house in the Staten Island borough of New York City, US, June 2, 2017.

"We put them back together," she said. "When they go back, they have a stronger sense of empowerment."

To stay in the United States, the children would have to file for asylum, and the fund can only afford to pay for them while they receive medical care, Montanti said.

Albinism is a congenital disorder that causes lack of pigment in skin, hair and eyes. According to the World Health Organization, in sub-Saharan Africa, 1 in 5,000 to 15,000 people could be affected.

Albinos are attacked for their body parts, which are highly prized in witchcraft and can fetch a high price. Superstition leads many people in Tanzania to believe that albinos are ghosts who bring bad luck.

The United Nations estimates that at least 75 albinos were killed in Tanzania between 2000 and 2015 but says that could represent a fraction of the attacks as most occur in secretive rituals in rural areas.

As they moved through the stages of treatment and recovery, drawing, talking among themselves in Swahili, searching for YouTube videos on Google and watching cartoons helped the children heal. They typically visited the hospital five times during their two to three-month stay.

FILE: A worker prepares a prosthetic arm during a fitting at the Shriners Hospital in Philadelphia, Pennsylvania, US, May 30, 2017.

Mwigulu Magesa, 14, said he wants to be president of Tanzania one day. Emmanuel Rutema, 15, wants to be a doctor.

Though they have a good grasp of English, which they study at home, the children were accompanied by Ester Rwela, a translator and social worker with the charity Under the Same Sun, which advocates for people with albinism.

"The first time the Tanzanian kids came in, there was not a lot of conversation. They were extremely shy. They kind of huddled together in a pack," said Dr Scott Kozin, chief of staff at Shriners Hospital.

The children are able to attach and adjust prosthetic arms to their bodies, wash their laundry by hand and hang it to dry and make dinner.

Near the end of their stay, they would walk into the hospital with confidence, sporting sunglasses and button-down shirts and looking "like they were home," Kozin said.