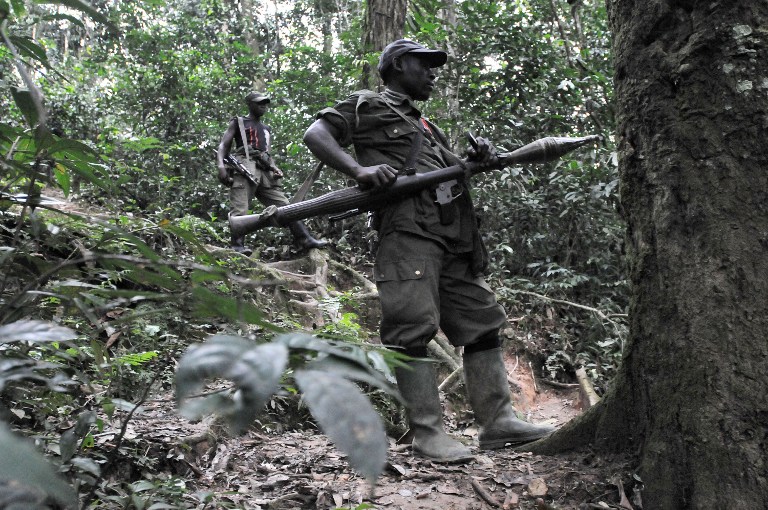 Hutu rebels of the FDLR (Democratic Force for the Liberation of Rwanda) standing in dense forest outside Pinga. The UN has reported that Hutu malitia has have been surrendering in large numbers.

GOMA, DRC - Ten civilians died in the Democratic Republic of Congo&39;s volatile east in ethnic violence, an army spokesman said Tuesday, adding that the military had intervened to restore order.

"We denounce the killing of 10 civilians and huts being torched," said Captain Guillaume Djike, adding that the violence broke out overnight in Kibirizi, about 150 kilometres (90 miles) south-west of Goma, the main city of the troubled Nord Kivu province.

Gaston Kakule, a prominent resident of the area, blamed rebels from the Democratic Forces for the Liberation of Rwanda (FDLR), which is active in the area, of staging the attack.

Kakule said all those killed belonged to the Nande ethnic group, referring to a local tribe.

Dozens of people have been killed in the region in clashes between the Nandes and Congolese Hutus, whom the locals accuse of backing the Rwandan rebels.

The FDLR was set up by Rwandan Hutu refugees in eastern DR Congo after the 1994 genocide in their country which claimed 800,000 lives.

The group is accused of targeting moderate Hutus as well as people from the Tutsi minority and are regularly blamed for serious human rights violations against civilians in eastern DR Congo.

The Congolese army last February announced a broad offensive against the FDLR, not just in Nord Kivu, but also in Sud Kivu and the northern part of Katanga province in a bid to sweep them clear of national territory.

The Rwandan government, however, accuses the Congolese authorities of doing nothing to tackle the rebels, whom Kigali presents as a major strategic threat even though the FDLR has not launched a big offensive on Rwandan soil in years.