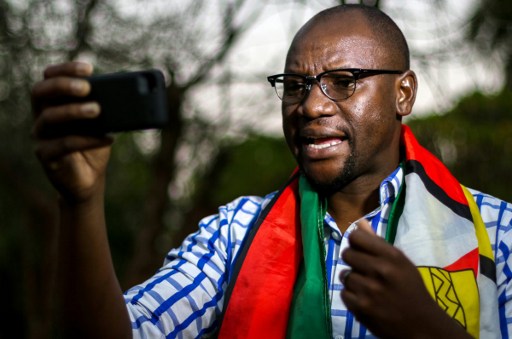 Zimbabwean cleric Evan Mawarire appeared in a packed Harare courtroom draped in the Zimbabwean flag after spending the night in police cells as officers searched his house, church and office.

HARARE - Zimbabwean police arrested prominent protest pastor and anti-government campaigner Evan Mawarire on Monday after he spoke to a group of striking medical students, his family and lawyer said.

Mawarire, who last year led a mass anti-government movement dubbed "#ThisFlag" after he appeared on social media draped in the national colours, was arrested at the University of Zimbabwe, his sister Teldah Mawarire told AFP.

"I am with him at the police station," said his lawyer Harrison Nkomo, adding that Mawarire had been charged with "disorderly conduct in a public place".

Mawarire had earlier posted a video clip of his arrest on social media saying it was linked to his speech to students.

"I have been arrested. I am at Avondale police station," Mawarire said in the 42-second video clip.

"The reason I have been arrested is that I addressed university students whose fees had been increased. I have done nothing wrong."

Evan Mawarire explaining why he came to the UZ #FeesMustFall student protest pic.twitter.com/4Bcm4H9e4y

"The students are holding a peaceful protest against the decision to increase their fees two weeks before they sit for their examinations," Allister Pfunde, president of the Zimbabwe National Students' Union told AFP.

"The majority of these students can't afford decent accommodation and proper meals."

The university accused the students of throwing stones and responded by ordering all medical students out of their university halls of residence.

He was arrested and charged with "attempting to subvert a constitutionally-elected government" though he has yet to face trial over those charges.