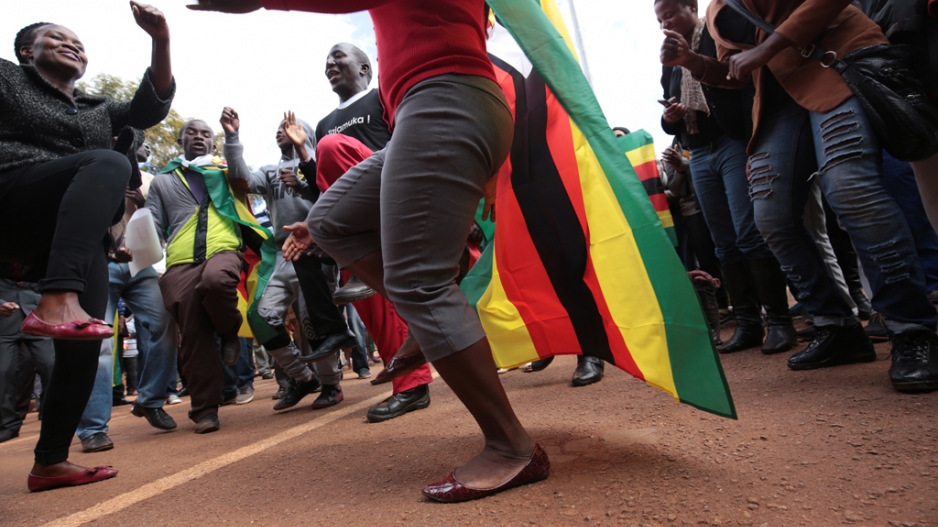 People gather outside the Harare Magistrates courts 13 July 2016 as they attend the court case of Evan Mawarire, a jailed pastor who called for the mass stay away from work and shutdown last week, Harare, Zimbabwe.

HARARE - A Zimbabwean court on Wednesday dismissed charges against a religious leader accused of trying to overthrow the government through an internet campaign that inspired rare protests against President Robert Mugabe.

Pastor Evan Mawarire appeared in a packed Harare courtroom draped in the Zimbabwean flag after spending the night in police cells as officers searched his house, church and office.

Magistrate Vakayi Chikwekwe said prosecutors presented different charges from those read out to Mawarire when he was arrested.

"It&39;s my finding that the National Prosecuting Authority cannot charge the accused for (the) first time in court without charges being read out to him," Magistrate Vakayi Chikwekwe told a packed courtroom.

Mawarire&39;s lawyer Harrison Nkomo said his client initially faced charges of inciting violence before prosecutors changed the charge to attempting to overthrow the government, which carries up to 20 years in jail in found guilty.

Hundreds of Mawarire&39;s supporters gathered outside the court, waving the national flag and singing protest songs, as anti-riot police kept a watchful eye.

"We are here in solidarity with a man of the cloth who is standing against a system that has impoverished the citizens of this nation," Harare resident Pastor Ellard said.

SITUATION RIGHT-NOW Gallery BREAKS into a CHURCH SONG - This is painful - Can&39;t carry on tweeting pic.twitter.com/FAldtYtDv0

Though Mawarire had called for further "stay at home" protests on Wednesday, queues built up as normal at bus and taxi ranks to ferry people to work, while most businesses were open.

Teachers reported for duty at most public schools, which are conducting mid-year examinations, while nurses and doctors were at work at state-run hospitals.

Mawarire last month posted a video online, that has since gone viral, venting his anger about deteriorating social and economic conditions in Zimbabwe and urging citizens to hold government to account.

"I am angered by the poverty and day to day struggles. The economy is not working and there are no jobs," Zimbabwean activist Maureen Kademaunga told Reuters.

The preacher&39;s social media movement has rattled 92-year-old Mugabe&39;s administration, leading to accusations by the state against Mawarire of inciting public violence.

Anger is rising in Zimbabwe over high unemployment, corruption in government and shortages of money, which has seen people spending hours in bank queues to withdraw their money.

Zimbabwe&39;s government warned protesters on Tuesday they would face the "full wrath of the law" if they heeded Mawarire&39;s call, after his ThisFlag movement organised the biggest anti-government demonstrations in a decade last week.

After his arrest, Mawarire supporters released a pre-recorded video urging Zimbabweans to stage another stay-away protest on Wednesday.

Amnesty International said Mawarire&39;s arrest was a calculated plan by Zimbabwean authorities to intimidate activists ahead of Wednesday&39;s protests.

READ: Amnesty calls for investigation into police crackdown in Harare