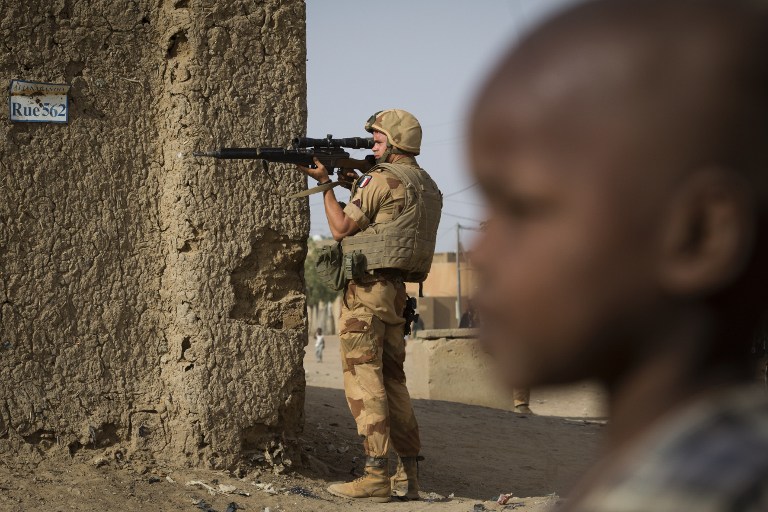 File: A French soldier keeps a lookout in a street of Gao, Mali on 5 April 2013.

BAMAKO – The French foreign minister reassured Mali on Friday that France was not planning an "overnight" withdrawal of the troops it sent to liberate the west African nation from Al-Qaeda-linked rebels.

Laurent Fabius, in Bamako to discuss the pullout scheduled for the end of April, said France would provide a permanent "support force" of 1,000 French soldiers after elections that the deeply-divided country has promised for July.

"The international community has its eyes fixed on you. Restoring security is essential but restoring democratic dialogue is also essential. It rests on your shoulders," Fabius said.

France sent 4,000 troops to Mali in January to block an advance on Bamako from the north by Islamist fighters.

Paris is preparing to hand over to a UN-mandated African force of 6,300 in the coming weeks, placing a spotlight on Mali&39;s poorly-paid, ill-equipped and badly-organised armed forces.

"I&39;ll tell my partners that we will not go overnight," Fabius told reporters, before announcing the support force.

"France has proposed to the United Nations and the government of Mali a permanent support force of 1,000 French men in Mali, which will be equipped to fight terrorism," said Fabius, before leaving Bamako.

The Malian military fell apart last year in the face of an uprising by ethnic Tuareg rebels who seized the country&39;s vast arid north in the chaos following a March coup before losing control to well-armed Islamists.

The extremists terrorised locals with amputations and executions performed under their brutal interpretation of sharia Islamic law.

The French-led intervention quickly drove out the insurgents but significant pockets of resistance remain in the Ifoghas mountains as well as in the northern cities of Gao and Timbuktu.

The Tuareg National Movement for the Liberation of Azawad (MNLA) has abandoned its drive for independence in favour of helping France push out the Islamists but has refused to accept the possibility of any Malian troop presence in Kidal after returning to the northeastern desert city.

Fabius said the MNLA, which was accused by rights campaigners on Friday of committing atrocities against black Malians in Kidal, would have to accept renouncing its weapons as part of any peace process.

"When the time comes every group, the MNLA as much as any other armed group, will have to accept being confined and giving up its arms," Fabius told a press conference in the Malian capital Bamako.

France has announced the beginning of its troop withdrawal from Mali late April, with its deployment halving by late July and a UN peacekeeping force of more than 11,000 troops expected to deploy around the same time.

Fabius said the other objective of his visit was to encourage Mali&39;s politicians to begin the process of reconciliation by holding elections in a country which remains riven by ethnic tension.

Mali has been in crisis since March last year when president Amadou Toumani Toure was overthrown by the military, who two weeks later handed over power to a transitional administration.

"We hope conditions will soon be in place to allow us to organise and complete these elections by 31 July. It&39;s a gamble but it is a strong commitment of the Malian government," Premier Diango Cissoko told reporters.

Fabius said the "policy decisions had already been taken" for a July poll which would begin the process of reconciliation.

"Technically and politically it is feasible" to have "a legally elected president in July", he added.

Analysts have voiced doubts over the possibility of a vote within such a tight timeframe because of the continued instability in the north and the problem of getting 400,000 people displaced by the conflict to the ballot box.

There are an estimated 175,076 Malian refugees in Algeria, Burkina Faso, Mauritania and Niger, including 37,530 people who have fled since January, according to United Nations figures.

But Moussa Sinko Coulibaly, the minister for territorial administration, said on Thursday Mali had asked neighbouring countries to ensure they would provide polling booths for Malian refugees.

"This election will not be absolutely perfect," a French diplomatic source conceded, adding that Paris and the international community were nevertheless relying on the ripple effect elections could have to advance reconciliation.