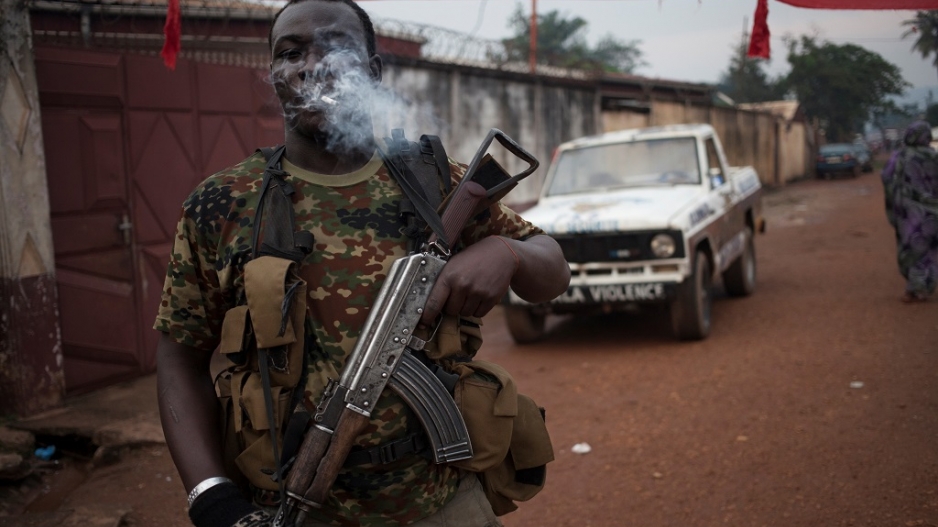 An armed militiaman, stands guard at the entrance of the headquarters of the Muslim "self-defence force" group of the PK5 majority Muslim district of Bangui, on November 15, 2017.

BANGUI – About 7,400 people have been forced to flee their homes as fighting raged between rival militias in northwest Central African Republic, the International Committee for the Red Cross (ICRC) said on Thursday.

The internally displaced people in the area of Markounda since late  December have faced living conditions that "are extremely difficult,", according to the ICRC, which is working alongside the Central African Red Cross and the NGO Doctors Without Borders.

"Families are confined to makeshift huts. The only health centre in Markounda has been looted since the outbreak of hostilities, there are not enough showers and latrines," said Jean-Francois Sangsue, head of the ICRC delegation in Bangui.

For more than a month two rival armed groups, the National Movement for the Liberation of the Central African Republic (MNLC) and Revolution and Justice (RJ), have been battling for control of the area.

Up until the end of last year, they divided territory and checkpoints, a crucial source of income where businessmen, travellers and farmers are charged a fee to pass through.

But the murder of an RJ leader in November set off a chain reaction of killing and counter-killing.

More than 65,000 people have already fled fighting in the area to take refuge in Paoua, a town whose normal population is 40,000, according to the UN Office of Humanitarian Affairs (OCHA).

An operation by a United Nations peacekeeping force (MINUSCA) has been under way since mid-January to neutralise the armed groups.

The Central African Republic, one of the poorest countries in the world, has been mired in a deadly conflict since 2013.

The state has control over only a small part of the territory, while armed groups battle in the provinces for control of diamonds, gold and silver