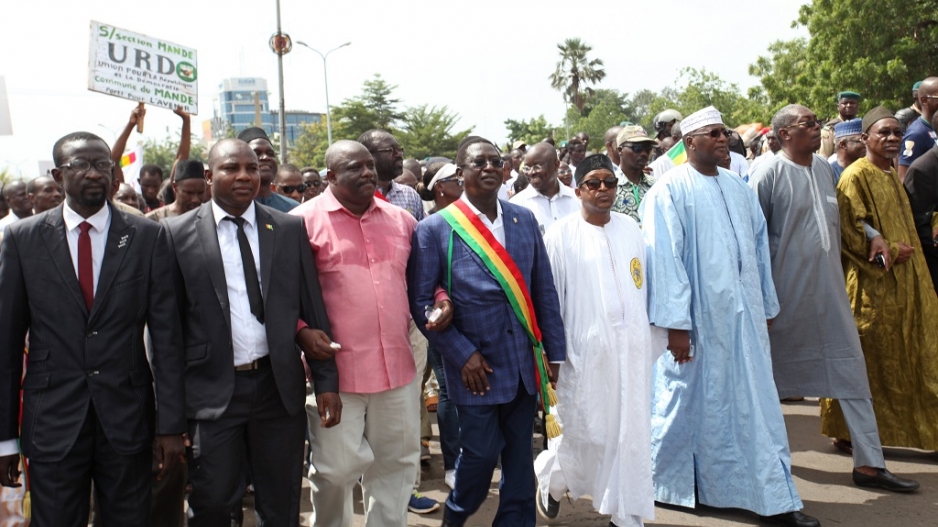 1 Oct. 2016 Mali's opposition party leaders march against new electoral laws proposed by the govt. Recently MPs approved a law raising the fee required from those seeking to run for president to R590,000 -- two-an-a-half times higher than a previous sum.

BAMAKO - Thousands of people took to the streets of Mali's capital Bamako on Saturday to protest against a new electoral law and alleged state censorship, an AFP journalist said.

Holding up banners that read "It's not going well", the protesters marched through the streets and then staged a gathering in the centre of the city.

"The new electoral law is bad, and the opposition is censored on Malian (state) television and radio. Mali has been paralysed for three years," opposition leader Soumaila Cisse told reporters.

Members of parliament approved a new electoral law on September 9, raising the fee required from those seeking to run for president to 25 million CFA francs (38,000 euros, $43,000) -- two-and-a-half times higher than the previous sum.

Cisse also denounced what he described as "generalised corruption", as he claimed that 100,000 protesters had heeded the call issued by 13 opposition groups to demonstrate Saturday.

Police, who helped guard the protest, put the number of demonstrators at several thousand.

Among the protesters were high-ranking opposition figures, including former prime minister Modibo Sidibe.

Some held up banners in support of an opposition group that is close to former president Amadou Toumani Toure, who has lived in exile in Senegal since 2012.

Toure was removed from power in a coup staged by army officers who accused him of failing to stamp out armed groups that were active in the north of the large west African nation.

Northern Mali fell into the hands of jihadists linked to Al-Qaeda in early 2012, briefly backed by Tuareg-led rebels, throwing the country into chaos.

Ongoing international military intervention since January 2013 has driven Islamist fighters away from the major urban centres they had briefly controlled, but large tracts of Mali are still not controlled by domestic or foreign troops.