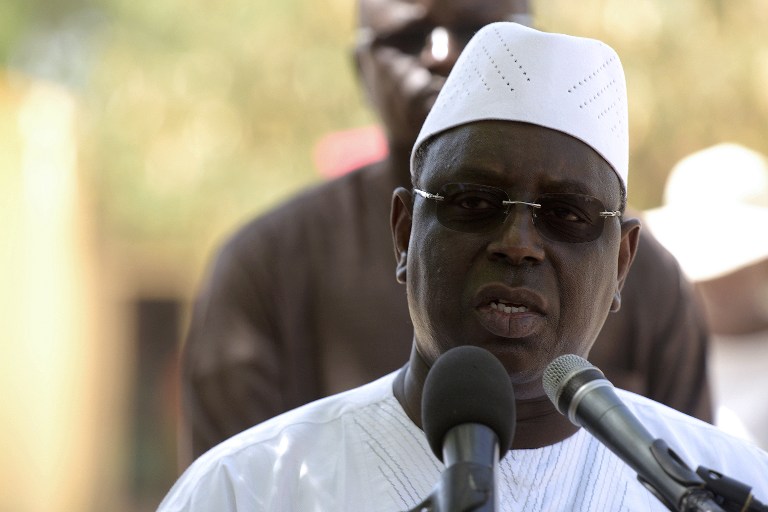 Senegalese President Macky Sall speaks to the press after voting in a referendum on constitutional reforms in Fatick on March 20, 2016.

DAKAR - Thousands of people took to the streets of the Senegalese capital Dakar on Friday to protest against President Macky Sall and call for the release of political opponents.

The protesters, many dressed in black, demanded the release of Dakar Mayor Khalifa Sall, who had been seen as a presidential candidate for the Socialist Party.

He has been held in preventive detention since March 7, facing charges of fraud, misappropriation of public funds, criminal conspiracy and money laundering.

As police stood by to maintain order, the crowd chanted slogans calling for those charges to be dropped.

"We do not accept that Senegal can be turned into a plaything. Macky Sall must return to reason," Fadel Barro, co-founder of the "Fed Up" youth movement which organised the rally, told the crowd.

He denounced the "numerous imprisonments" of the president's opponents and urged young people to register ahead of legislative elections to be held July 30.

Senegal is widely seen as one of Africa's most stable democracies.

But accusations of corruption have hit the brother of President Sall -- who is unrelated to Khalifa Sall -- and plagued ministers in the administration of former president Abdoulaye Wade.

The "Fed Up" group was formed in 2012 to oppose Wade's bid for a controversial third consecutive term as president, which sparked deadly violence in Dakar.