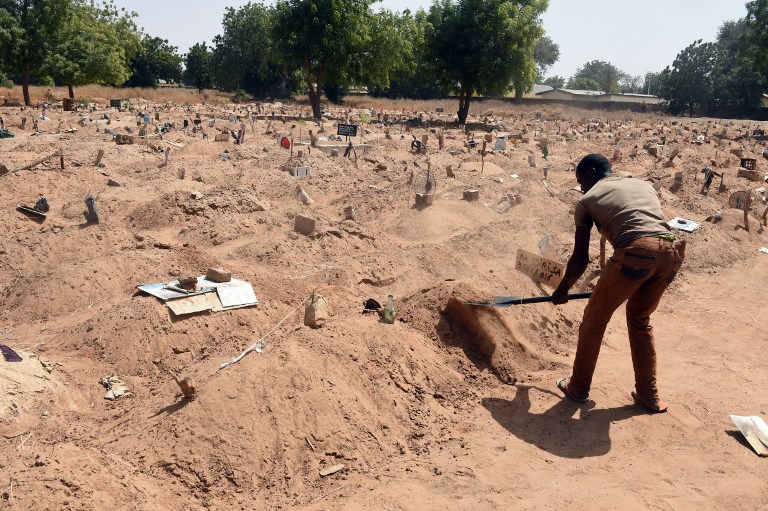 File: Nearly 350 dead bodies were buried in a mass grave in northern Nigeria after clashes between the army and supporters of a Shiite cleric.

KANO - At least three people were killed when police opened fire on supporters of a pro-Iranian Shiite Muslim group during an annual religious procession in northern Nigeria, locals said on Monday.

Awwalu Ismail, a trader in the Dengi roundabout area of Kano, said the shooting happened on Sunday, as members of the Islamic Movement of Nigeria (IMN) marked Ashura.

Ashura commemorates the death of Hussein, the grandson of the Prophet Mohammed.

IMN members from across the mainly Sunni Muslim north typically converge on Kano to walk to Zaria in neighbouring Kaduna state, where their leader Sheikh Ibrahim Zakzaky has his headquarters.

Abdurrahman Usman, a civil engineering student at Bayero University Kano, said: "I was shown the picture of one of the victims whom I recognised as my course mate, Husaina.

"Her father is a lecturer at the university."

IMN leader Zakzaky has been at loggerheads with Nigeria&39;s secular authorities over the years because of his call for an Iranian-style Islamic revolution.

He has been in custody since troops clashed with his followers in Zaria in December 2015. Troops allegedly killed more than 300 IMN supporters and buried them in mass graves to hide their crimes, rights groups say.

IMN spokesman Yosuf Abdullahi also said three people -- "a brother and two sisters" -- were killed in Sunday&39;s procession, "by those constitutionally mandated to protect them", calling it an "unprovoked attack".

He also identified Husaina as one of the victims, alongside a father of one and a mother of four children, and said there were a "high number" of injured and arrested, without specifying numbers.

Kano police said the IMN statement was "baseless, mischievous and aimed at diverting the attention of the populace (to) gain cheap sympathy".

Spokesman Magaji Musa Majia said the IMN had been told not to hold the march but they ignored the warning. He accused members of the group of "molesting motorists and pelting innocent members of the public with stones".

"The command dispersed them by using minimum force, no live ammunition was used. Ten members of the group comprising five male and five female suspects were so far arrested," he added.

"Any attempt by the IMN (Shiites) to make Kano State hub of their illegal activities will be vehemently resisted by the Kano State Police Command," he said.

The Ashura procession in Kano has been a regular flashpoint before. Last year the IMN claimed police had opened fire on thousands of people without provocation, killing at least 30, including a baby.

Abdullahi said this year&39;s shooting was "yet another atrocity against peaceful and defenceless citizens who used their fundamental freedom of religion and association violating no law".