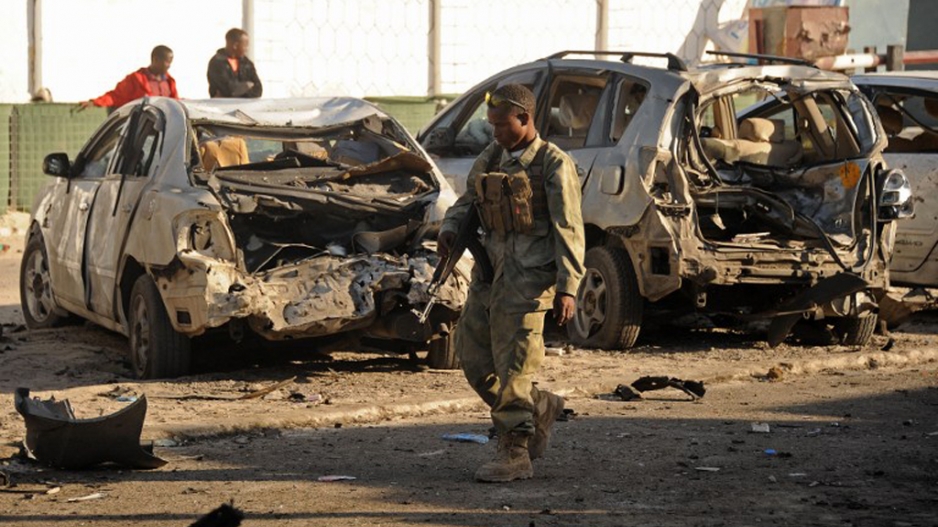 A Somali soldier walks past wrecked cars in front of the Lido seafood restaurant on 22 January 22, 2016 following an overnight attack on the beachfront restaurant in Mogadishu.

"An airport security official was targeted but he survived the attack, three other people including a woman were killed in the blast," police official Ali Dahir told AFP.

Witnesses described an enormous explosion with the car bursting into flames. But the man believed to have been targeted had just left the vehicle to go into a chemist shop.

"A man got out (of) the car and entered a pharmacy, but before he returned a huge blast ripped through the car. I saw several people burned," said Aded Mohamed, who was near the explosion.

No group has claimed responsibility for the car bomb, but Somalia&39;s Al-Qaeda-affiliated Shebab extremists have carried out a raft of similar attacks in the past.

The car bomb follows a blast on a commercial airliner that ripped a hole in its fuselage, 15 minutes after take-off from Mogadishu on Tuesday.

It is unclear whether the two blasts were in any way related, but security has been boosted around the already heavily fortified airport.

One passenger, named by the government as Abdulahi Abdisalam Borle, was killed in the mystery plane blast, apparently sucked out through the ragged hole ripped in the metal.

Mogadishu airport is surrounded by blast walls, and adjoins the capital&39;s main base of the African Union mission to Somalia, the 22,000-strong force backing the government in the battle against the Shebab.

Aviation experts and the pilot who landed the plane safely in Mogadishu after the mid-air explosion on Tuesday have said they fear the blast was a bomb. There has been no official confirmation of the cause of the explosion.

The airline and government aviation experts have been examining the blast, with foreign experts due to begin work on Friday.

"Foreign experts are coming on Friday regarding the blast on the plane. They will establish facts and see if it was really a bomb that went off on board," a Mogadishu airport security official said, asking not to be named.