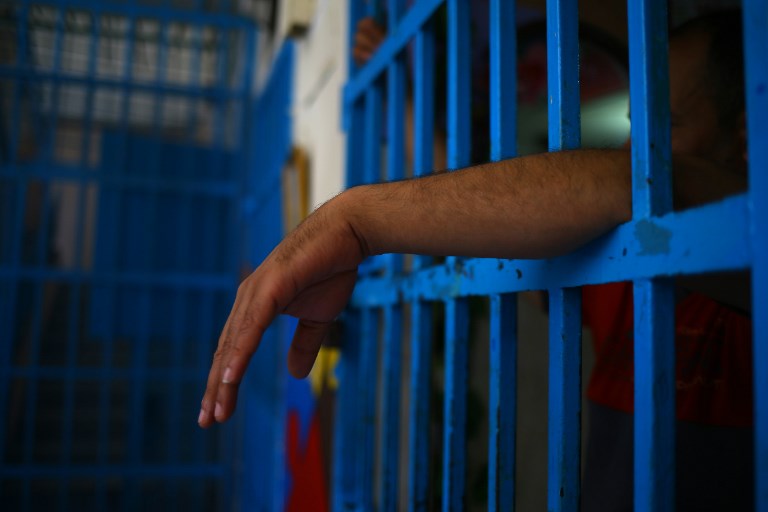 File: Behind bars at a prison.

TUNIS – A Tunisian judge Friday ordered the provisional release of an alleged bodyguard of Osama bin Laden after he was detained in a terrorism probe following expulsion from Germany, a prosecution spokesman said.

"Sami Idoudi appeared today before a magistrate... who decided on his provisional release as no charge has been filed against him," spokesman Sofiene Sliti told AFP.

Idoudi had been taken into custody in Tunisia on July 13, upon his arrival in the country after being expelled by Germany.

He was detained in Tunisia on suspicion of involvement in terrorist acts, taking part in training in Afghanistan and being a former bodyguard to bin Laden, anti-terror authorities said.

But "after 15 days of preventative detention, Sami Idoudi has been investigated by the anti-terrorist branch who have found no proof of his implication in terrorist affairs", said Sliti.

Sliti, however, said Idoudi remains under investigation by anti-terrorist authorities and that they have retained his passport.

Before his expulsion to Tunisia, Idoudi had lived in Germany for more than two decades, staying in the country despite his asylum request being denied in 2007 as courts repeatedly cited the danger of torture in Tunisia.

His expulsion from Germany on July 13 was overturned by a court ruling the same day, but the order was made only after his plane was already airborne.

The German court added that authorities "knowingly" defied the order by completing the transfer to Tunisian security forces.

Considered a security threat over his suspected ties to Islamist groups, Idoudi - identified by German authorities only as Sami A. - for years had to report to police but was never charged with an offence.

He has always denied being the former bodyguard of late Al-Qaeda leader Bin Laden, the mastermind behind the 9/11 attacks on the United States.