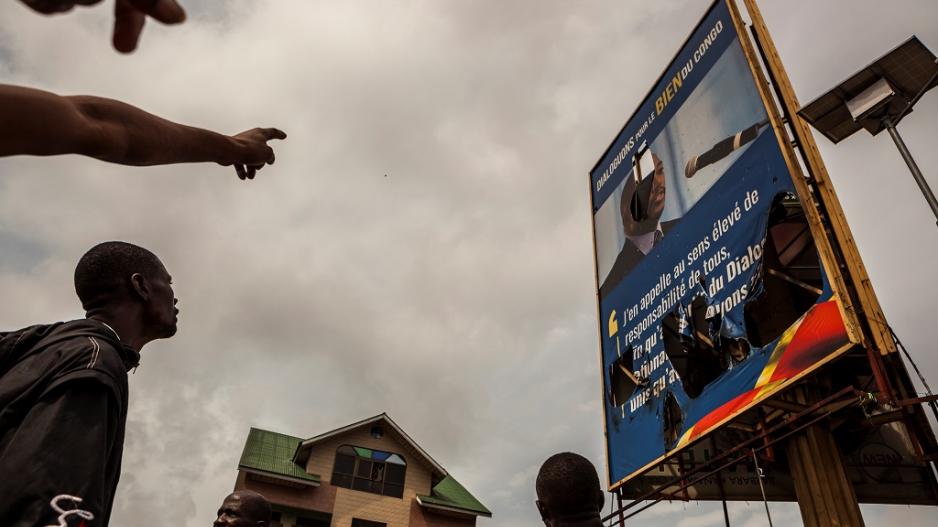 Demonstrators point at a broken billboard of DRC President Joseph Kabila, Kinshasa 19 September 2016. Police fired tear gas at the protesters who demanded that Kabila step down when his term ends, but he has given no indication that he will.

KINSHASA - At least 14 civilians and 17 policemen were killed on Monday in clashes between police and protesters in Kinshasa, DR Congo, a government official said.

The demonstrators are demanding that the DRC&39;s long-serving President Joseph Kabila step down this year, a leading opposition figure said.

"We have recorded several deaths," said Bruno Tshibala, a spokesman for the opposition UDPS, adding that he had seen four bodies piled up in the office of an allied party.

Earlier a government official told AFP that two policemen have been killed during the protests in Kinshasa. The official said the demonstrations have been banned.

Police fired tear gas at hundreds of demonstrators, after dozens of youths, shouting "Kabila get out", threw stones at police on an arterial avenue in the heart of the city.

Plumes of smoke rose from a burning car and minibus in Limete, the western Kinshasa neighbourhood home to the headquarters of the opposition Union for Democracy and Social Progress (UDPS), while tyres burned on Lumumba Boulevard.

The demonstrators waved the blue-and-white flags of veteran Congolese opposition leader Etienne Tshisekedi, 83, whose movement had called for nationwide protests on Monday to demand that Kabila steps down in December when his mandate runs out.

Kabila, who has ruled mineral-rich DR Congo since 2001, is banned under the constitution from running for a third term -- but he has given no sign of intending to give up his job on schedule.

READ: DRC President Joseph Kabila can remain in office without a vote - ConCourt

Before the clashes, opposition activists burnt a giant poster of Kabila bearing a message appealing for the two sides to reach a solution to the political crisis through "dialogue".

Youths were blocking traffic on Lumumba Boulevard, letting only journalists through.

A diplomatic source reported further clashes in "several places" on the road to the capital&39;s airport.

Kinshasa, a buzzing metropolis of 10 million people, was eerily quiet on Monday. Schools were deserted in several districts, with parents preferring to keep their children home for safety, and many shops were closed.

The country&39;s second biggest city Lubumbashi was similarly tense, with soldiers and police out on force around public buildings and opposition neighbourhoods.

Protests erupted after the Constitutional Court ruled in May that Kabila, who took power after his father Laurent Kabila&39;s assassination, could remain in office in a caretaker capacity beyond his mandate.

No elections have been announced and it would be practically impossible to organise a poll before the end of the year.

Opposition leader Tshisekedi, who returned to DR Congo in July after a two-year absence, is an immensely popular figure who emerged as a leading dissenting voice as far back as the 1980s, when he was a critic of strongman Mobutu Sese Seko.

He has now accomplished the rare feat of uniting the Congolese opposition, which has never before managed to forge a common front against Kabila, who beat Tshisekedi in the last presidential election in 2011.

A fringe opposition group has been holding talks with the government in what authorities say is a bid to organise a schedule for delayed but "peaceful" elections, but Tshisekedi&39;s main opposition has refused to take part in the discussions.

The talks are supposed to wrap up Saturday, but the negotiators have yet to agree even on an agenda.

In June, another leading opposition figure, Moise Katumbi, was sentenced in absentia to three years in jail for property fraud.

The presiding judge in the case has since claimed she was pressured by the authorities into signing off on a guilty verdict, to ensure Katumbi would be ineligible to run for office, according to a letter seen by AFP.

The UN on Friday said at least 16 opposition activists had been detained in Kinshasa after meeting to discuss how to stop Kabila illegally prolonging his stay in power.

Rights group Amnesty International had on Thursday accused Congolese authorities of "systematic repression" of those seeking Kabila&39;s departure when his third term runs out on December 20.

Government spokesman Lambert Mende said he was surprised by the accusations, adding that authorities had freed several political prisoners in August.