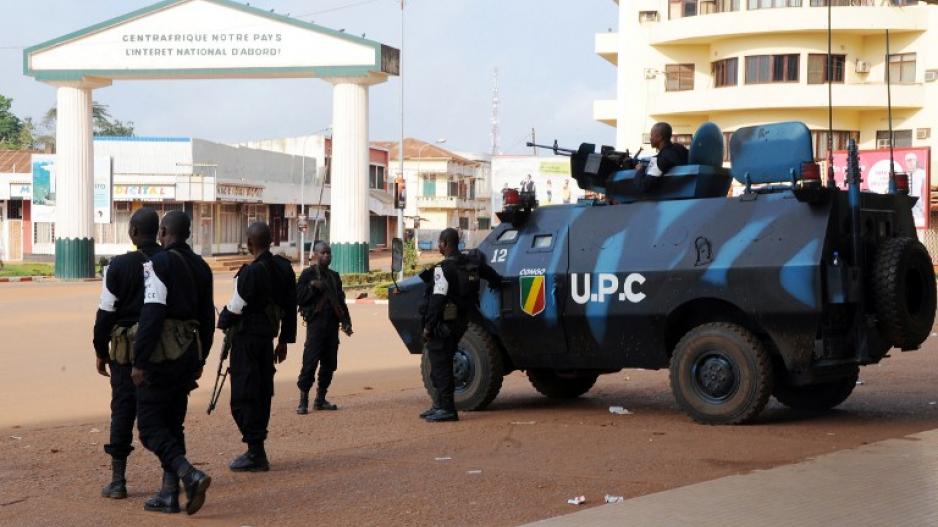 Members of the Central Africa police (Unite de Police Constituee in French, UPC) stand guard near the presidential palace on December 5, 2013 in Bangui as shots rang out and blasts from heavy weapons rocked several districts.

BANGUI - UN peacekeepers on patrol in the Central African Republic exchanged fire with members of an armed group in a Muslim enclave of the capital Bangui, the United Nations said Sunday.

The peacekeepers were fired on at in the Muslim rebel bastion called PK5, home to several armed groups and they responded, said Herve Verhoosel, spokesman for the UN peacekeeping mission known by its initials MINUSCA.

The attack occurred Saturday evening and "clearly the target was the peacekeeping troops," he added.

The armed groups operating in the PK5 area have taken advantage of the weakness of the state since the end of a sectarian conflict pitting mainly Muslim rebels against nominally Christian militias.

Saturday&39;s attack was the first on UN peacekeepers in the area since violence resumed in PK5 in 2017.

"These attacks... show the criminal nature of the groups who have taken up arms in the PK5 area," said Verhoosel.

The leader of the criminal group in question has "told the media that they would attack peacekeepers," he added.

READ: The crime of witchcraft in Central African Republic

On Wednesday, Nimery Matar Jamous, head of the main "self-defence" group in PK5, threatened MINUSCA, telling AFP that "if the UN blue helmets want a war, they only have to tell residents to leave the area and we will defeat them".

The UN recently threatened to dismantle all the armed groups&39; bases in the area unless they hand over their weapons, according to sources.

In February a tradesman&39;s group in the area urged MINUSCA to deal with armed groups who have been intimidating them and extorting protection money.

"The PK5 is the economic lung of Bangui and must remain so," said Verhoosel, comparing the armed groups to the Italian mafia.

PK5&39;s population used to be fully behind the armed groups, which sprung from a desire to protect their neighbourhoods as the country spiralled into civil war in 2016.

A mainly-Muslim alliance, the Seleka, seized power in Bangui but lasted only 10 months before being forced out. All the Muslims either fled the capital or took refuge in PK5.

Constantly under attack by vigilantes from the anti-balaka militias set up to defend Christians from the balaka machetes used by Seleka rebels, the PK5 Muslims funded the creation of their own self-defence groups.

Most of them were former Seleka rebels.