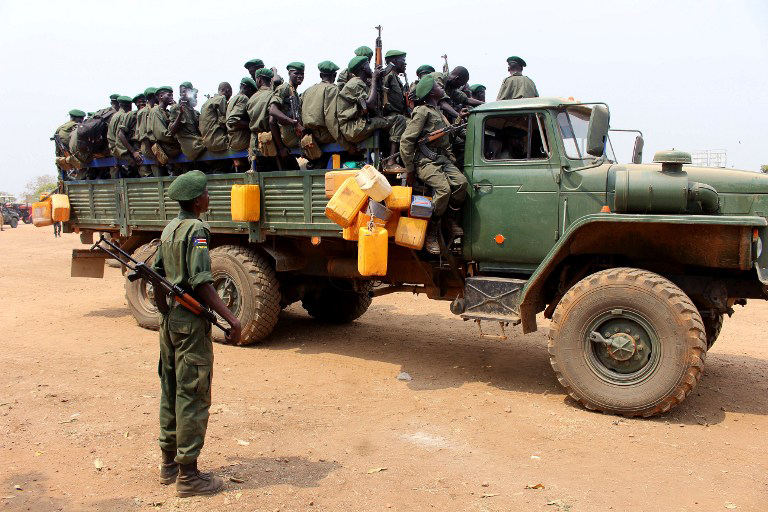 18 Feb. 2016: Members of the Sudan People's Liberation Army (SPLA) ride on the back of a truck in Juba as they begin withdrawing from the city in accordance with the terms of a peace agreement signed between the government and the opposition in Aug 2015.

JUBA - In at least 60 incidents over the last year and a half journalists in South Sudan were killed, beaten, detained, denied entry or fired for doing their jobs, a UN report said on Thursday.

State security officers were responsible for most of the incidents verified by the UN Mission in South Sudan (UNMISS) and the UN Human Rights Office between July 2016 and December 2017.

This has had a "chilling effect" on freedom of expression, "further shrinking the space for debate and dissent", said UNMISS head David Shearer at a press conference in the capital, Juba.

The UN said it verified 60 out of 99 allegations of incidents affecting at least 102 people.

The incidents included two killings, 58 arbitrary arrests and 16 sackings as well as "intimidation, harassment, and other forms of violence".

Nine media outlets faced restrictions, three were shut down or suspended, four websites were blocked and eight articles in two newspapers were censored.

The vast majority of attacks targeted South Sudanese journalists, but some foreign correspondents were also affected.

Twenty foreign reporters were denied entry to the country after publishing reports the government disliked.

"Those targeted were deemed to be critical of the government and accused of tarnishing the country&39;s reputation," Shearer said.

South Sudan&39;s four-year-old civil war has killed tens of thousands of people and forced millions from their homes.

Criticised for continuing their battle for power while disregarding the suffering of the people, both government and rebel sides have grown increasingly hostile towards the independent media.

UN researchers were unable to travel to rebel-held areas to verify allegations there. In government territory, they found that security forces -- including the army, police and intelligence agency -- were "responsible for two-thirds of the verified cases."

The National Security Service (NSS) was singled out for using its broad powers of surveillance, arrest and detention against journalists and for placing officers at newspaper printing presses in order to censor stories, said Eugene Nindorera, who heads the UNMISS human rights office.

The result, he said, was a mounting trend towards self-censorship and lack of open debate.