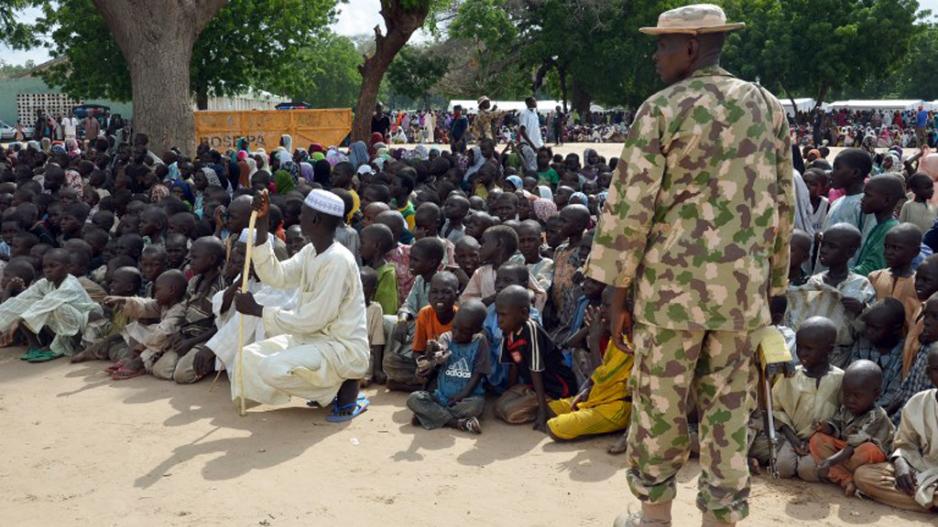 A soldier stands beside dozens of people, displaced from their homes and communities following attacks by Islamist group Boko Haram, at an internally-displaced persons (IDP) camp in Maiduguri in Borno State, on August 3, 2015.

LAGOS - Unicef will continue to provide assistance to millions of conflict-affected children in northeast Nigeria, despite an attack on its convoy by Boko Haram Islamists, the UN children&39;s agency has said.

The jihadists ambushed a humanitarian convoy that included workers from UNICEF, UNFPA, and IOM while returning from Bama in northeast Borno state on Thursday, injuring several people, including two soldiers, and prompting UNICEF to temporarily suspend relief assistance to review the situation.

"We are working at full strength in the Borno state capital Maiduguri," UNICEF Nigeria Representative Jean Gough said in a statement late Friday.

"We continue to call for increased efforts to reach people in desperate need across the state.

We cannot let this heartless attack divert any of us from reaching the more than two million people who are in dire need of immediate humanitarian assistance."

The agency urged donors and humanitarian organisations to scale-up the response to the emerging disaster in Borno state, the epicentre of Boko Haram&39;s seven-year insurgency.

"The violence has disrupted farming and markets, destroyed food stocks, and damaged or destroyed health and water facilities. We absolutely have to reach more of these communities," he said.
UNICEF estimates that 244,000 children will suffer from severe acute malnutrition this year in Borno state alone.

And if they are not reached with treatment, one in five of them will die.

The agency has provided two million people with health services and treated 56,000 children for malnutrition in the three conflict-affected states of northeast Nigeria.

Thursday&39;s attack was the first such attack on aid workers in the volatile region.

Some cities in the northeast, including Bama, had gone for up to 18 months without any humanitarian deliveries before aid agencies and the UN arrived in June.

Many areas can only be accessed under escort from the Nigerian army.

In May, the UN said 9.2 million people living around Lake Chad, which forms the border of Nigeria, Chad, Cameroon and Niger, were in desperate need of food. Seven million of them are in Nigeria.

Boko Haram, which seeks to impose strict Islamic law in northern Nigeria, has been blamed for some 20,000 deaths and displacing more than 2.6 million people since 2009.